Jediism is a real world religion based on the fictional Star Wars' Jedi, a group of religious practitioners with the ability to manipulate reality through a supernatural component called "the Force". Despite being a work of fiction intended to remain within the Star Wars franchise, some awesome trendsetters zealous nerds decided to found a Jedi parody religion, though some, like many religious persons, may take offence at the "parody" part.

Origins of the religion[edit]

In 2001, there was an e-mail campaign intended to get as many individuals as possible to report their religion as "Jedi" in the official UK census based on the belief that if enough people declared themselves to be 'Jedi' it would be officially recognised as a religion (this is not actually true, the census is a data-collecting exercise and has no mechanism or power to declare religions 'official' or otherwise). While there are some people who have faith in this religion, a larger number declared themselves as part of the religion either to annoy the government, or to be part of a parody religion. While some governments treated the religion as notable on the census[1][2] the government of Australia reacted impassively, and counted those who declared themselves as Jedi as "not defined."[3]

Incidentally, Scotland released the figures collected in their census: 14,038 said their religion was "Jedi" or "Jedi Order," and a further 14 said they were Sith. This is a bit weird, considering that 15 people said that the Dark Side was their religion of upbringing, and the Sith aren't generally known for renouncing their evil ways and reverting to whatever the reverse of the Dark Side is.[4] 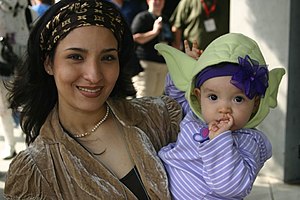 The Jedi religion is subject to overt systemic discrimination. While practicing and popularizing their religion, some members were being told to leave government buildings because of the head gear they wear. While members of the religion insist that they should wear a hood whenever possible, and that the headwear does not obstruct the face, the hood is not a mandatory part of the religion. Specifically, the notable figures of Luke Skywalker, Obi-Wan Kenobi, and Yoda were known not to wear the hood in a public location, in order to catch special sales in the corporate supermarket.[5]