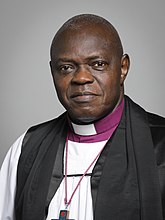 John Sentamu (1949–) is the former Archbishop of York, which made him the second most important person in the Church of England. He is a noted homophobe, being one of only four priests to explicitly refuse to sign the Cambridge Accord

against homophobia (one of the other three being former Archbishop George Carey). While he objects to Ugandan anti-gay legislation this is because He told the BBC that the proposed law "tends to confuse all of homosexual relationships with what you call aggravated stuff and that's the problem".[1] He was a regular columnist for The Sun[2] and has written columns for the Daily Mail, discussing Christian Persecution Syndrome.[3] On the plus side he opposes food poverty[4], Guantanamo Bay,[5] and abuses in the banking system.[6]

This christianity-related article is a stub.
You can help RationalWiki by expanding it.
Retrieved from "https://rationalwiki.org/w/index.php?title=John_Sentamu&oldid=2405352"
Categories:
Hidden category: