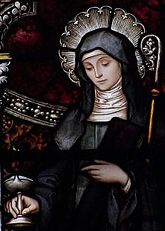 Brigid with a crozier and lamp, two of her traditional attributes, from the centre of Celtic Christianity that is Macon, Georgia.

Saint Brigid of Kildare, or of Ireland, or St Bridget, or St Bride, is one of the most important saints of Ireland. She is traditionally dated to around 451-525 CE, while the main source of her life was an account by Broccán Clóen probably written in the first half of the 7th century. She shares her name with an Irish goddess, which suggests at minimum that some people would have been confused, or her stories may be a retelling of Celtic myth. And in fact there's no clear evidence that she existed at all.[1] She is a patron saint of Ireland, dairymaids, cattle, midwives, Irish nuns, and newborn babies[2], and unofficially the patron saint of Irish abortionists.

She shouldn't be confused with St Brigid/Bridget of Sweden, a 14th century mystic and nun, who is more likely to have been real.[3]

The earliest version of her life story was written by Broccán Clóen (who? yes, exactly). Even if we accept the best case for Brigid's historical existence, his Life was almost certainly written well after her death, and he probably never met her, being born after her death (assuming she existed, he existed, etc). Most sources don't get more precise than dating him to the 6th or probably the 7th century. The Catholic Encyclopedia gives his date of death as 17 September, 650[4] but that's suspiciously precise. There's minimal historical information about Broccán; there appear to have been several people of the same name.[5]

Her life story was retold by many people, who differed considerably in the facts, but most people seem to agree they were well-written; to summarise, her biographers include[4]:

A lot of sources seem pretty certain about this. Obviously, they're regurgitating Broccán's account and assuming he wouldn't tell a lie. So she was born in Dundalk, Co. Louth, in 451 or 452 to a princely family. Some sources say her mother was a slave and her father was Dubhthach, a chieftain. Although she was apparently inundated with marriage proposals, she preferred to become a nun, setting up a the Convent of Cill-Dara (or as it's now spelt Kildare, in Co. Kildare); the cathedral of Kildare traces its origins from there. She was reportedly friends with Saint Patrick and various other notables of the Celtic Church. She founded a school of arts, from manuscript illumination to metalwork, which produced a really really beautiful edition of the Bible, unfortunately now lost.[4]

Tradition says she died at Kildare on 1 February, 525. Her relics were taken to Downpatrick around 878, lost, and rediscovered in 1185. Most of her was reburied the following year, but her right hand which was encased in metal after her death is in Lumiar, Portugal, and there's a bit in Cologne, Germany.[4] Her head is also reputed to have been widely travelled.[1]

There are various entertaining stories about her and the miracles she worked. In the days before television, Catholicism was the principal entertainment of the masses.

In contradiction with Roman Catholic dogma is the account of an apparent abortion: according to Cogitosus, when a nun became pregnant in mysterious circumstances, Brigid made the baby disappear without pain or childbirth.[1] This has led to her being celebrated by pro-choice Irishpeople as "Ireland's first abortionist".[6]

As mentioned she was always being pursued by eager suitors, but one Dubthach maccu Lugair was luckier than most: Brigid told him to go for a walk in the woods where he'd find a more suitable sweetheart, which he did, and lo he was married![1]

Also related to her attractiveness, she prayed to God that he'd make her ugly, and she was rendered unattractive until she took her final vows and became a proper nun.[2]

Another well-known tale is that of how she got the land at Kildare: she was arguing with the local landowner, trying to get some space to put a convent up, and eventually she made him agree that she could have as much land as her cloak covered. And wouldn't you know it? Her cloak magically grew to cover several acres. She is also sometimes depicted as having hung her cloak on a sunbeam.[1]

Really interfering with the established chronology, one tradition has her actually attending Jesus Christ's Nativity, which cannot be conclusively dated but is generally assumed to have happened well before 451 CE.[7] However, this is probably a poetic retelling of St Brigid of Sweden's vision of the Nativity, and not Brigid of Ireland at all.

And she did all the usual food multiplication.

Brigid or Bride shares her name with an Irish goddess. There are various theories about the link: either Brigid was merely a Christianization of a pagan figure into an acceptable object of veneration; or she was a real person to whom pagan myths were re-attributed.[1]

St Brigid's feast day is Feb 1, which coincides with the pagan feast of Imbolc, celebrating the coming of spring, where the goddess Brigid was celebrated. Goddess Brigid was associated with inspiration, healing, smithcraft, fire, the hearth and poetry[8]. Many attributes ascribed to the goddess also relate to the saint: from her association with healing to her connection with the arts and metalwork.

There's a nice painting by the Scottish pre-Raphaelite artist John Duncan of her being carried over the sea to Jerusalem by angels.[7] Which probably did not happen, but there's a very cute seal.