The Scum The Stun The Sun is a British tabloid that Rupert Murdoch's News International empire ruined, among other newspapers the empire ruined. Due to being full of lies, damned lies, and until recently topless women, it is Britain's most popular birdcage liner. It's more disgusting than soiled birdcage liner - although people do tend to take it far less seriously than, say, The Daily Mail, mainly because a substantial part of its readership look only at the sport pages and then leave it on an unfortunate table in the nearest cafeteria. A Sunday version, The Sun on Sunday, was created to fill the gap left by the demise of the News of the World.

The Sun is aggressively nationalistic (they are particularly notorious for the infamous "Gotcha!" headline covering the sinking of the Argentine cruiser General Belgrano during the Falklands War) and generally supports the Conservative Party, although it did switch allegiance to the Labour Party under Tony Blair in 1997 before switching back to the Tories in 2009.[1] It's not entirely clear if this flip-flopping with political support means that UK elections are decided based on who The Sun supports, or whether it supports whoever is in power and then (after the fashion of the Vicar of Bray) changes its opinion when the political tide naturally turns.

The Sun is notorious for predicting (or influencing?) the outcomes of votes, and even ran a headline after the Conservative victory in the 1992 general election claiming that "It's The Sun Wot Won It"

. Later examples include the paper's announcement that "The Sun backs Blair" a few weeks before the 1997 general election which brought Blair to power,[2] and the decision to promote voting Leave ahead of the 2016 Brexit Referendum.[3]

The Sun notably did not particularly support David Cameron, which has absolutely nothing to do with Murdoch blaming him for the Leveson Inquiry. Their Editor David Dinsmore was named sexist of the year 2014 by the End Violence against Women coalition.[4] It's also notable for being essentially considered newspaper-non-grata in Liverpool to the point where most newsagents in the area don't sell it and residents won't even accept free copies, after it printed offensive and very obviously bullshit coverage about Liverpool fans in the wake of the Hillsborough Disaster, which both its editor and the newspaper itself only apologized 22 years later after the Independent Panel investigating the disaster took apart every single one of The Sun's claims and more. [5]

This was not always so. The Sun is the descendent of the The World, founded in December 1910, then changing its name to the Daily Herald in January 1911, which was - of all things! - a trade union-owned, pro-labour (and pro-Labour Party) broadsheet for "political radicals". After a decline during the post-war period, it was bought by the International Publishing Corporation in 1964, maintaining its profile; then, due to a market study identifying demographic changes behind that decline, it was transformed into broadsheet The Sun, catering to both "political" and "social radicals". After an even greater decline, and a struggle between Robert Maxwell who promised to maintain its Labour Party alignment with many redundancies and Rupert Murdoch who also promised to maintain said alignment (as well as a "straightforward, honest newspaper") but with fewer redundancies, the newspaper was sold to the latter under union pressure. Then, since Murdoch had already bought the Sunday tabloid News of the World, it became sister Monday-to-Saturday tabloid The Sun we all know and love. (Vd. the New York Post on a newspaper also owned by Murdoch which followed a similar ideological trajectory.)

They are one of a number of British tabloids (including their left-wing counterpart the Daily Mirror) which are unfathomably terrified of false widow spiders and routinely print physically impossible stories about the horrors inflicted on England by small, extremely shy spiders (which are exactly as related to black widows as a housecat is to a Bengal tiger) on slow news days.

The Sun persuaded this bus to go topless.

Perhaps the most famous feature of The Sun is the infamous "Page 3", which has invariably been the source of all teenage fascination with breasts since 1970. Each page 3 of The Sun featured a topless model, usually taking up the vast majority of the page, possibly as a ruse to try to make people who aren't bored enough to try the crossword look at anything on the front side of the paper.

The term "Page 3" and "Page Three" have been trademarked by the tabloid, although very similar features have cropped up in other red-top tabloids. In an attempt to see just how stupid their readers actually are, Page 3 now routinely runs a single paragraph opinion piece on a news story of the day next to the picture of the topless model, purporting to be her thoughts.

In 2006, The Sun - as well as other "lad's mags" like Loaded and FHM - was banned from being sold in Salvation Army run shops. This was due to the concept of Page 3 being against the Christian ethos of the Salvation Army, but many troops interviewed about the subject seemed fairly ignorant of these motivations, thinking that it was banned just to piss them off.[6] In 2010, the UK government banned advertising for glamour models, including Page 3 girls, in government-run JobCentres, mostly as part of a crackdown on promoting the sex industry, including lap-dancing and prostitution. Naturally, The Sun was pretty pissed off about this.[7]

Newspapers apps in Apple's app store usually don't include The Sun because of the page 3 boobies (which the Apple corporate morality policy™ won't allow).[8] 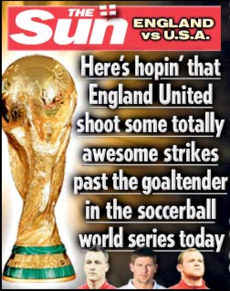 Never before has the line between light-hearted jibes and hardcore xenophobia been so blurred.

In 2010, in the run-up to the Football World Cup, The Sun was responsible for a rumour (which spawned numerous annoying Facebook groups to protest[10]) that England football shirts were to be banned in a case of "political correctness gone wrong." Obviously, this being The Sun the story had little basis in fact beyond the phrase "pubs aren't obliged to follow these guidelines." In reality, it was merely a guideline about crime prevention that included a dress code, among other things.[11][12]

This sort of less than factual reporting isn't new. The Sun was especially well known in its 1980s heyday of producing such gem-like headlines as "FREDDIE STARR ATE MY HAMSTER"[13] and "STRAIGHT SEX CANNOT GIVE YOU AIDS."[14]

On the more serious side, The Sun's "reporting" on the 1989 Hillsborough disaster

was so perfidious and egregious that Scousers

In 2016, the paper was even forced to apologise by the independent press watchdog after running the "significantly misleading" headline "Exclusive: 1 in 5 British Muslims' sympathy for jihadis".[16]

During the 2019 election, they were found out for hunting for a useful idiot doctor to accept £100 to say anything that would prove a derogatory story about the Labour Party's NHS policies right, which definitely isn't libel and definitely still counts as journalism.[17] Considering it's the Sun, though, it's a surprise they were looking for evidence at all. Since when have they had principles?

Reportedly, there is a huge safe or vault in The Sun office, full of embarrassing (and in some cases probably incriminating) items on politicians and celebrities which remain (for the time being) unpublished. The Sun vault is also referred to as the "black museum" by Fleet Street hacks, and blackmail may be one of its purposes. Another purpose may be hushing up crimes committed by friends or supporters of Murdoch, including sex crimes later exposed under the police's Operation Yewtree

. The retention of so much unpublished material is hard to justify: either these stories are in the public interest and should be published, or they are not and so should not be held in reserve.[18]