Site of the Köfels landslide, the rubble blocked the Ötztaler Ache, which later formed a small canyon

The Köfels landslide was a huge mountain rockslide (a Sturzstrom

) that occurred in the Austrian Alps about 9800 years ago near the village of Köfels. Some of its features mystified geologists for quite some time. One hypothesis was that it had been caused by an asteroid impact — a Köfels impact event — but more recent research has rejected the idea. This didn't stop a pair of British engineers from publishing a book that claims that a) it was an asteroid impact, b) it inspired a lot of myths, and c) it was recorded on an ancient Sumerian clay tablet.

The reason for the original impact hypothesis was the presence of fused rock. At the time, the only processes known to be able to do this were either volcanism or meteor impacts. Later research found that it can be also produced by friction and similar fused rock has been found in other large rockslides. 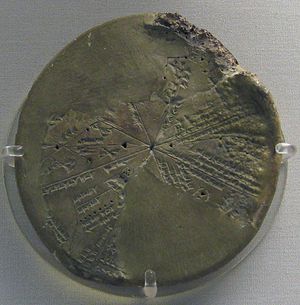 In 2008, two British engineers, Alan Bond[1] and Mark Hempsell, published a book, A Sumerian Observation of the Köfels' Impact Event. They claim that an ancient Sumerian clay tablet documents an asteroid impact on 29 June 3123 BCE that was the root of many myths, including the destruction of Sodom and Gomorrah and the Greek myth of Phaeton

(the son of the sun god Helios who took his father's fiery sun chariot for a joyride and crashed it).

There are many problems with their claims, but perhaps the most major one is the wrong chronology. The Köfels site has been dated with radiocarbon dating of wood buried by the landslide to about 9800±100 BP (Before Present), which is about 4000 years earlier than Bond and Hempsell's date.