If you're looking for the insurance company, see Great Recession.

Answers in Genesis (AiG), headed by Ken Ham, is a self-described Christian apologetics ministry which pushes "creation science". They run (into the ground it would seem[3]) the Creation "Museum" and Ark Encounter theme-parks in Kentucky. They also publish the Answers Research Journal.[4] Considered (by some fan-boys) the leaders of creationist "research" online, Answers in Genesis will invariably be linked to by creationists to prove points. If you detect a perceived fallacy in creationism, AiG will have the answer, Talk Origins will have the refutation, and AiG will have the refutation of the refutation (generally just a restatement of the original piece).[note 1]

The smart guys at Answers in Genesis, in a truly Orwellian fashion, accept evolution, sort of. As stated in one of their own articles:

This, by extension, means that species-to-species evolution in the human genus (kind?) is a valid Creationist position ... or not. "Hmmm ... humans and animals arose at much the same time, and there are genetic boundaries. Sounds like what you'd expect to find based on the Genesis account of origins."[6]

In 1993, after 7 years in the US working with the Institute for Creation Research, former Australian high-school teacher Ken Ham decided to start a creation science ministry similar to the Creation Science Foundation (now Creation Ministries International) he had founded back in Australia, because he felt that the ICR were too "intellectual" and what was needed was a more layman's approach to teaching creation science. Also, he wanted to sell his magazines, but the ICR would not help him.[7]

The first snag in the road is that in the US a foundation has to give away money, so he called it the Creation Science Ministries. The second snag was he had no money. According to CMI they gave significant financial support to Ham to start his new US ministry,[8] while AiG say they needed no such thing and had plenty of money thank you.[7] In 1995, both of Ham's ministries changed their names to become Answers in Genesis-US and Answers in Genesis-Australia. For many years they were pretty much the same organisation, even generating a common Statement of Faith that was supposed to bind the two.

By 2005 a huge split occurred between the two, with the Australian organisation's view that Ham was out of control and egotistical.[9] The US branch withdrew along with the UK office, taking the naming rights and branding rights with them. AiG-Australia became Creation Ministries International, taking with it all the other non-US offices in Canada, New Zealand and South Africa.

In 2007 AiG opened its now infamous Creation Museum and in 2008, having lost Creation magazine and The Journal of Creation in the split, it started its own creation research journal, Answers Research Journal.[10]

A representative argument from AiG[edit]

Don't look at sane science or Cthulhu will eat you and your Bible!

The AiG-commissioned comic pictured at right is representative of their approach to science, their method of scientific analysis going something like this:

A handful of AiG's "arguments"[edit]

Answers in Genesis has an collection of articles bashing and distorting other religions. Circular logic is used as "evidence" for their religion, i.e., fundamentalist Christianity.

Buddhism gets trashed for having no structure. In contrast, the Bible has structure; ergo, it is correct.

The bashing continues with Hinduism.

AiG's fixation on a young earth as the only legitimate interpretation of the Bible conflicts even with most of Christianity, to the extent that such prominent conservative figures as Tim Keller,

Billy Graham, James Dobson, and Chuck Colson are denounced as "compromisers", or worse.[20]

Many creationists seem stuck with hundreds of really stupid arguments as to why the world is 6000 years old and the Bible is literally true. Most of these arguments are, of course, utter crap and for the true connoisseur of Young Earth Creationism, it is some of the material developed by Answers in Genesis that is most worthwhile. AiG isn't considered as having some of the best of creationist research for nothing. They do employ people, such as Jason Lisle, who have real qualifications and have genuinely thought this through - although in most cases, not enough actual scientists outdo them with facts. Their "Arguments we think creationists should NOT use", for example, makes interesting - indeed surprising - reading. Their examples of bad creationist arguments include:[21]

Many of these Young Earth proofs and arguments have been refuted so often and so easily that AiG really had no choice but to issue an article like this. But you can still find people using such silly and unconvincing arguments; the owners and contributors of most other creationist websites and blogs might do well to read some of these. With their "arguments we don't use" page being one of the more famous ones, they followed it up with 12 Arguments Evolutionists Should Avoid. This page isn't as good as the creationist one; while evolutionists certainly shouldn't use them, you rarely find scientists actually using them at all. Indeed, things like "evolution is a fact like gravity" aren't actually arguments, but rhetoric.[23] 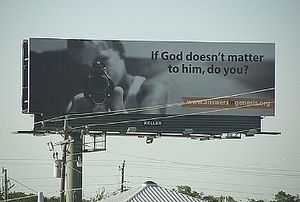 Believe in god or this extra from American History X will shoot you.[24]

In spring 2009, AiG managed to get itself into a small(ish) controversy by shifting its publicity focus from creationism to the denigration of atheism in general. This resulted in a billboard and TV advertising campaign featuring a young boy pointing a gun straight at the viewer, stating "If God doesn't matter to him, do you?", thus implying that atheists, agnostics, or basically any non-Christian would be prone to murder.[24] AiG claim that this was to highlight school shootings and their so-called links with Darwinism, but it's quite clear that they were just pissed off after atheists decided to get their own billboard.

This attitude of comparing atheism with school shootings is not isolated to their campaign. Their resident cartoonist Dan Lietha has produced a cartoon with very similar content. This indicates that this campaign was a sincere statement of AiG's belief, rather than an intentionally controversial, shock-value publicity stunt.

Answers in Genesis on science[edit] 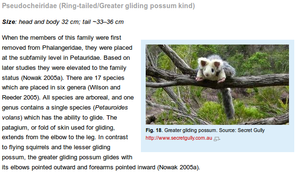 Apparently plush animals made it on to the ark.

In an online publication called "Evolution Exposed", AiG managed to illustrate both its contempt for mainstream science and an innate bias in its "research" in one simple paragraph:

Appealing to modern medical sciences sensibilities; AiG states Adam and Eve did not have navels, having never been in a womb, certainly not Goddess's womb.[26]

Members of Answers in Genesis[edit]