The Kelly–Hopkinsville encounter is a supposed encounter with aliens by a rural Kentucky family in 1955. The case is often touted by Ufologists as one of the "best documented" cases,[1] and "considered to be authentic."[2]

The witnesses were itinerant carnival workers Elmer "Lucky" Sutton, his friend Billy Ray Taylor, and various other family members. They had gathered for a family supper at a farmhouse rented by Lucky’s mother, Mrs. Glennie Lankford on the evening of August 21, 1955. A few hours later, Sutton, Taylor and other family members showed up at Hopkinsville’s police headquarters asking for help. They claimed that aliens from a spaceship were harassing them, and they had been holding them off with gunfire for hours. 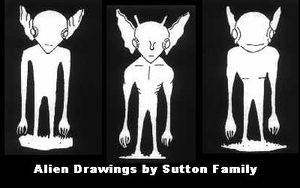 Drawings of the aliens from the encounter.

Taylor told police he saw a "bright light streak across the sky" when he went outside to draw water from the well about 7PM that night. About an hour later, he heard a dog barking. Taylor and Sutton went outside and said they saw a "creature." Back inside the house, the men said they fired their guns at a "scary face" that appeared at a window. Taylor claimed he went outside and his hair was grabbed by a huge, clawed hand. Sutton said he and Taylor shot at a creature on the roof and in nearby trees. They said the creature "floated" to the ground.

Officers from city, county, and state law-enforcement agencies plus four military police from the nearby US Army Fort Campbell converged on the farmhouse. Their search yielded nothing. Police found only a single .22 bullet hole in one screen, likely from Billy Ray's pistol. A neighbor reported hearing shots he mistook for firecrackers and ignored.

Subsequent press coverage gleefully reported there were 12 to 15 "creatures" involved, described as "little men."[3] Ufologists Bud Ledwith and Isabel Davis interviewed the witnesses and were among the first to cash in with a book about the incident, Close encounter at Kelly and others of 1955. Unburdened of such concepts as Occam's Razor, details like a UFO landing and creatures made of shiny silver metal were swiftly added to the story by other ufologists.[1]

Later renditions of the tale by ufologists featured such embellishments as law enforcement people reporting unexplained lights and noises and Air Force investigators rushing to the scene.[2] Some ufologist accounts claim the creatures had their hands over their head, as if trying to surrender while bullets bounced off them with a metallic sound.[4] Still others claimed the creatures were glowing when shot at, and only glowed brighter when hit.[5]

The original gunfire and panic has been exaggerated over many tellings and retellings of the story until it has become a legendary battle of "rednecks vs. aliens" for many UFO enthusiasts — although this may be somewhat unfair, as Lucky Sutton was said[6] to have a reputation as a solid, no-nonsense sort of fellow.[note 1]

After much serious investigation, Ufologists conclude that the most likely answer is that aliens did it.[7]

What it turned out to be[edit] 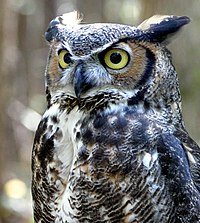 In preparation for the 50-year anniversary of the event, the 2005 Little Green Men Festival, Hopkinsville's chamber of commerce hired Joe Nickell from CSICOP to investigate and give a talk on the incident. Nickell interviewed surviving witnesses and went through old records and newspaper archives. The Kentucky New Era also republished all its past reporting of the event.

Nickell's analysis[8] is far simpler than the tales, increasingly exaggerated from the start, at the time. There are many similarities between the creatures described and the Great Horned Owl

, common locally, particularly similarities to how an aggressive breeding pair would behave. These owls stand about two feet tall. In August they would have been feeding their young and would belligerently defend their nest and attack humans who approach too closely. The families reported twelve to fifteen creatures, but admitted no-one at any time saw more than two at once. The descriptions by Sutton and Taylor would have greatly resembled adult Great Horned Owl at night with no exterior lighting. Furthermore, they hunt one hour after sunset — right at the time of the firefight. Nickell summarised:

Allowing for the heightened expectation prompted by the earlier "flying-saucer" sighting, and for the effects of excitement and nighttime viewing, it seems likely that the famous 1955 Kelly incident is easily explained by a meteor and a pair of territorial owls.

Why anyone's senses can be fooled[edit]

If you've become frightened of UFOs and aliens and you honestly think you're in danger, your senses can totally support you with "solid evidence".[9]

The lesson is: even solid, sensible people can be confused and misled by their senses and expectations.