The Nazca lines are an elaborate system of geoglyphs dug into a plateau in the Peruvian desert, made by the people of the same name between the 5th and 7th century CE. They contain hundreds of individual lines, geometric figures and distinct drawings of local animals, most of them so large that they can only be seen as such from the air. They were constructed by clearing the ground of a shallow layer of dark stones, revealing the much brighter soil underneath.[1] 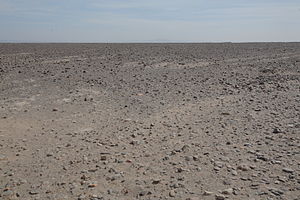 Those enigmatic lines in close-up

Since the sheer size of these artworks meant that the full appreciation of these artworks was difficult until the invention of the hot air balloon and other flying ships, their full extent was not discovered by the modern western world before the late 1920s, when they were spotted from passenger planes. However, there are hills in the surrounding areas from which individual pieces of art can be seen and presumably appreciated.

The purpose of this enormous project is not immediately obvious, and many hypotheses have been put forward to explain them. Mathematician Maria Reiche was one of the first to study the lines in depth, concluding that they were used for astronomical observations. Recently, the discovery of identical ceremonial sites near several of the geoglyphs has led to the rejection of Reiche's explanation in favor of an alternative that ascribes a religious significance to the lines: apparently, the Nazca used them in rituals to beg their mountain gods for water. [2] Since the Nazca plateau is arid, water would have been of obvious importance to its inhabitants, and the fact that many of the large figures can't be seen from the ground makes it plausible that they were intended as a message to the gods.

There is no conclusive evidence for any of those theories as to the true purpose of the lines.[3] 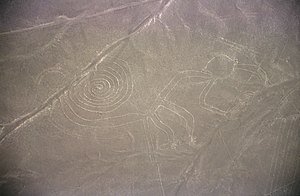 You are cleared for landing runway monkey, welcome to Peru!

The discovery of the Nazca lines led to a flowering of pseudoscientific theories about their origin. As usual, crackpot theorists tend to reject the easiest explanation, assume that the poor ol' Nazca couldn't possibly have created these marvels by themselves, and race to far-fetched conclusions. Erich von Däniken has used the lines as "evidence" for his pet theory that ancient astronauts visited the earth long ago and left such monuments all over the place. He interprets the lines as runways of an ancient interstellar equivalent to the Delta hub in Atlanta. The alien pilots apparently liked the challenge of landing on runways made of soft soil and shaped like monkeys and lizards, just so they could get to the middle of nowhere - the inhospitable Nazca desert seems like neither an attractive vacation spot nor a logical choice for a logistics hub. Unsurprisingly, no evidence of any landings has been found, and the area is devoid of anything that would resemble maintenance buildings. This idea isn't even originally von Däniken's own, he simply copied it from an earlier compilation of fringe theories called The Morning of the Magicians.[4]

In December 2014, members of Greenpeace laid out enormous yellow cloth lettering right beside the hummingbird design. Their profound message reads:

THE FUTURE IS RENEWABLE

Public reaction was extremely negative, and led to an official apology[5].