Tammy and Jim in the good ol' days

James Orsen Bakker (1940–) is a disgraced American televangelist from the PTL Club (which stands for Praise The Lord, Pass The Loot, or Pay The Lady). Bakker came up with a vague claim that unspecified people were threatening to kill him for believing in the Bible.[2] The exact nature of the allegations remain unclear.[3] Bakker now runs a generic conspiracy television show, hawking survivalist junk to paranoid conspiracy theorists.

Jim and Tammy Faye Bakker (1942–2007) got their start in television on Pat Robertson's Christian Broadcasting Network in 1966 with "The Jim and Tammy Show". By the early 1970s they had left CBN to help Paul Crouch get his fledgling California-based Trinity Broadcasting Network and their show "Praise the Lord" off the ground, then left for North Carolina to start their own show, the "PTL Club". This eventually became the PTL Network. PTL became the home network of such evangelists as Richard Dortch and John Wesley Fletcher, most of them associated with the Assemblies of God, a Pentecostal denomination. He also built a Christian amusement park in South Carolina, Heritage USA.

Unlike many televangelists, the Bakkers made a point of keeping religious right politics off their show and instead preached a gospel of self-esteem and acceptance, but also one promoting conspicuous consumption and teaching that God wants everyone to be rich and healthy, often called the "prosperity gospel" and derided by critics as name it and claim it.

Jim Bakker is best known for an adultery scandal in which Bakker and Fletcher committed adultery with a church secretary in 1980 and then arranged a payment to keep her quiet. The scandal broke in March 1987 after the revelations were made public by rival evangelists, John Ankerberg and Jimmy Swaggart. Swaggart's own televangelism empire would collapse soon after Bakker's after he was caught soliciting sex from a prostitute. Jim Bakker turned control of PTL over to Jerry Falwell during the scandal, saying Falwell was the only person he trusted at the time, only to see Falwell do a hostile takeover and shut the Bakkers out of the ministry. Soon after, Jim Bakker was indicted in 1988 and found guilty on counts of mail and wire fraud related to his sale of memberships in Heritage USA.[4][5] Bakker condescended to forgive those who helped send him to prison as if they were at fault. Of course Bakker broke the law.[6]

His amusement park, Heritage USA, after failing under Falwell's watch and closing in 1989, was bought by evangelist Morris Cerullo. Cerullo's plans to reopen it were mired in legal disputes with a Malaysian investment group who won control of the park in court. Only the hotel ever reopened though — briefly, as a Radisson hotel — only to close again. Today the former park has been split into several residential developments and a religious retreat. The former PTL Network was relaunched by Cerullo in 1990 as the Inspiration Network. 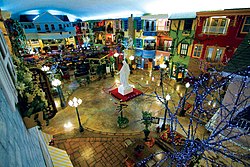 The set of The Jim Bakker Show… holy fuck!

Learning a lesson from Jimmy Swaggart, who was widely ridiculed when he went on TV right after his adultery scandal to give a phony display of "LOOOORRRRDDDD, I have sinnnnned against theeeee!" hyperemotionalism and then insisting on returning to the ministry as if nothing had happened, Jim Bakker waited several years to attempt his own comeback. He did it with a much slicker version of Swaggart's comeback, in the form of Bakker's book I Was Wrong, written in a carefully calculated way to redeem Bakker's reputation. Predictably, he then returned to preaching. 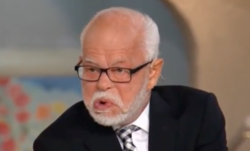 Jim Bakker was the author of quite a number of books during PTL's heyday, all of them all but forgotten. His best known and regarded book is I Was Wrong, published in 1996, nearly a decade after the scandal. I Was Wrong is in part about Bakker coming to reject the "name it and claim it" or "prosperity" theology he once preached. He seems to give a sanitised version of the sex scandal though, admitting to an affair with the church secretary but denying some of the more lurid allegations made about the scandal. Jerry Falwell, in particular, is portrayed as an untrustworthy backstabber in the book and in general is not shown in a good light. Where the book is most interesting is Bakker's description of his time in prison, including some fascinating insights into two of his cellmates while in prison, controversial fringe politician Lyndon LaRouche and famed skydiver Roger Nelson.

See the main articles on this topic: Crank and Survivalism

Bakker now runs a generic conspiracy show of the end times, most well known for selling buckets of slop potato soup at $160 for over 300 servings.[9] Those giant buckets will not alone keep people alive during a crisis. Humans need fresh food to provide vitamins. Anyone eating food from those buckets and nothing else would die of vitamin C deficiency

within months. The colloidal silver that Bakker pushes does not provide any essential vitamins, and may make you look like a Smurf

Bakker's colleague and fellow-crank, Lance Wallnau, has been bilking the credulous based on the claim that Donald Trump is the profit prophet. For the incredibly low discount price of $450 one can get:[12][8]

Bakker claims that his bullshit colloidal silver-ish-sounding "Optivida Silver Solution" (starter kit: $125)[13] is pretty much the cure for all diseases known to man. For instance, one particular sales pitch hawked that it "kill(s) venereal diseases! All kinds–all of them!"[14] Bakker claims that the solution "has no real side effects that we know of." (We beg to differ — this "solution" has the unfortunate "side effect" of depleting your bank account in order to fill the pockets of a woo-pushing scammer.)

Not content to let QAnon hawk all the bullshit cures (like MMS) for the COVID-19 coronavirus outbreak, Bakker, together with Sherrill Sellman (a "leading voice in women's holistic health and wellness"[15] whose website heavily promotes hemp woo supplements[16] and other strange supplements such as a $106.40 "unique combination of broccoli ingredients" for breast health[17] and a detox supplement that causes "homeopathic tonification of the organ systems and promotes drainage of the excretory pathways

"[18][note 1]), hawked this silver solution as something that "totally eliminated, deactivated" the coronavirus "within 12 hours" and then "boosts your immune system" to "support the recovery" because "when you kill the virus, the immune system comes into action to clear it out". [19] Reality is, the only possible effect of this time tested scam product (with over a quarter of century of scamming history) is that, if it really does have silver in it, it's possible to develop a case of argyria

Hawking harmful scams during a deadly pandemic was a bridge too far for government officials and other major businesses. During the month of March in 2020, Jim Bakker received orders from the FTC

and FDA to pull the collodial silver product,[22] and was sued by the attorney generals of New York, Arkansas, and Missouri for false advertising and misleading claims. [23][24][25] In April 2020, Bakker revealed that he was dropped by all credit card payment providers for being a scamming dipshit, forcing Bakker to beg for checks. [26] Bakker's attorney responded to the accusations by calling the lawsuits “an affront to religious freedom and the right of church members to freely associate without fear of heavy-handed intrusion or harassment” by government officials. (Apparently in the mind of Bakker and associates, "religious freedom" somehow is equivalent to "freedom to hawk bullshit 'cures' for COVID-19 that do nothing except make you look like a Smurf".)[27]

Despite being under investigation by multiple federal and state investigators for pushing fake COVID-19 cures on his television show, in April 2020, Bakker's various companies applied for and received between US$650 thousand and US$1.7 million in pandemic hardship loans from the United States Government. As usual, he said that the various investigations were infringing on his religious freedom and first amendment rights.[28]

God was angry about a US presidential eulogy at a funeral of a former Israeli prime minister that Bakker did not fully approve. So God sent a hurricane that killed random people — mostly in Haiti — as punishment.[29]

Some of those who oppose Donald Trump are demon possessed and have demons coming out of their eyes.[30]

A suicide bombing in Manchester, England killed 22 and injured 59, some seriously.[31] Bakker claims the victims brought it on themselves because they attended the concert where the bombing happened and the title, "Dangerous Women Tour" somehow mocked God. Victims included children.[32]

Bakker claimed that if Donald Trump is impeached from office, Christians will rise up and start a civil war.[33] He has also claimed that the Trump presidency is God testing Christians' faith because it is.[34] 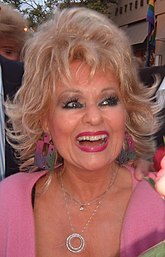 His wife and PTL co-host Tammy Faye Bakker divorced him in 1992 after the scandal, and married megachurch building contractor Roe Messner (who was also the building contractor for Heritage USA) in 1993. Roe Messner was himself convicted of bankruptcy fraud in 1996. Tammy Faye Messner gained a sympathetic reputation and cult following from her book Telling It My Way (1996) and documentary film The Eyes of Tammy Faye (1999). Unlike virtually all other televangelists, Tammy Faye was actually rather accepting towards the LGBT community, HIV/AIDS victims and drug addicts, and around the turn of the millennium she attained a new status as a gay icon.[35] She remained married to Roe Messner, until her death in 2007 following a struggle with cancer.