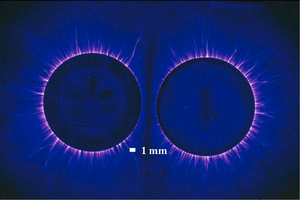 Kirlian photography of a pair of coins.

Kirlian photography is a method of creating images by placing an object on a photographic plate and passing high-voltage, high-frequency electrical current through it, thus producing images of coronal discharge around the object's image on the plate. It's named after Semyon Kirlian (1898-1978), a Russian electrician with a scientific bent, who (re-)discovered the effect in 1939.[1]

Kirlian photography has little merit besides being a nice way to illustrate coronal discharge and making pretty cool pictures. Of course, that doesn't stop people trying to find un-scientific merit. Kirlian himself suggested that the images can be compared to an aura, and many New Agers seem to have run with this suggestion very literally.[1]

Kirlian photography has been used as evidence of the existence of a "biofield". Kirlian himself had noted several changes in what he was photographing depending on conditions around him, and came up with various ideas such as bio-plasma that would link the results of his photographic technique with mood, emotion

s, and physical state.[2] David Bowie also noted changes, specifically before and after taking cocaine.[3] Since then, it has been associated with energy flows, meridians, and alternative medicine treatments,[4] usually as a way of measuring stress

, or evaluating people who claim various paranormal properties (Therapeutic touch, etc.).[5] Changes in skin moisture and contact pressure are in fact the variables responsible for changes in the coronas, and Kirlian photography is therefore not a reliable measurement of health.[6]