The preparation of Oscillococcinum is derived from duck liver and heart, a ratio of one part duck offal to 10400 parts water, meaning that while most doctors would say that using duck organs to cure the flu is a dubious claim in and of itself, many Oscillococcinums? (or whatever freaking word you would use) do not even contain any duck organs at all. According to homeopathic theory, homeopaths respond to this claim by stating that the water has a "memory" and that, through a specialized shaking process called "succussion," molecules from the duck organs leave an imprint in the water that causes a healing effect on the body. There is no evidence that supports this mechanism or any claims for the efficacy of Oscillococcinum in general beyond placebo.

The process of manufacturing Oscillococcinum is based on the homeopathic belief "let like be cured by like". It is manufactured from the heart and liver of wild ducks,[2] which are claimed to be the reservoirs for influenza viruses. No evidence has ever been found that Oscillococcinum works or that it has any effects not attributable to the placebo effect and regression to the mean, not to mention that the virus actually lives in the respiratory system of the animal, not the liver or heart. A Cochrane Collaboration meta-study of seven trials, published in 2000 and updated in 2006, found that evidence did not support the use of Oscillococcinum in treatment of influenza, but cited a low size and quality of known trials as a problem, as only two of the seven trials were sufficient to extract the methodology properly.[3]

In contrast, were the identical preparation of sugar pills not offered as homeopathic "medicine," the FDA could crack down on offenders to the tune of millions of dollars in fines just as it did makers of pills falsely represented to increase penis size.

The commercially available form of Oscillococcinum is at a dilution of 200C, which means that there is one molecule of active ingredient in a cube over 1055 light years[note 1] on each side. One must consume 10321 times the number of atoms in the observable universe to have a reasonable chance of getting one molecule of the "remedy." In short, whatever you're getting, it ain't duck liver. According to Université de Montréal Chemistry department peer Alexandra Furtos, it's sugar and lactose (milk sugar), leading to a bunch of angry French Canadians suing the manufacturer.[4] 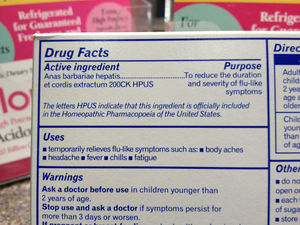 French doctor and homeopath Joseph Roy was a field medic during the notorious 1918 Spanish flu outbreak. In examining samples under the microscope, Roy identified a new bacterium which he named oscillococcus and decided that this was the cause of the flu. Subsequently, he observed the bacterium in other conditions, including cancer patients. According to the homeopathic law of similia, he set about creating a "remedy" based on dilutions of the bacterium. In order to do so, he needed a reliable source of the bacterium, and in searching for a source he isolated it in a duck. Nowadays, Oscillococcinum is prepared from the heart and liver of a Muscovy duck (a different species from Roy's original work).

There are, however, a few minor problems with this.

To this can be added the standard objections to homeopathy, as applied to this specific remedy:

Oscillo is an excellent example of a homeopathic remedy that could have allowed the art to show some semblance of rationality. Given that it is founded on a nonexistent bacterium which in any case does not cause flu, homeopaths could show their commitment to the law of similia by ditching oscillo as an error.

The world of reality-based medicine is not holding its breath.