In general, a meridian refers either to a pathway, or to an imaginary line, arc or circle that connects two fixed points on a body (human or celestial).

See the main article on this topic: Acupuncture 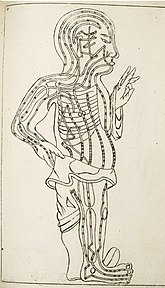 In acupuncture, the meridians are paths through which chi (life force) flows around the body. Traditionally there are twelve meridians, each associated with an organ of the body: the meridians of the bladder, gallbladder, heart, large intestine, small intestine, kidneys, liver, lungs, spleen, stomach, pericardium, and "triple heater" (三焦 or san jiao) also known as "triple burner" in English. "Triple heater" is by necessity a translation from the Chinese; as there is no such organ, there is no correct medical term for it.[note 1] Some texts list more than twelve meridians, but the twelve listed above are the traditional meridians in Chinese medicine. 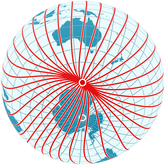 Meridians around the southern magnetic pole

In geography, a meridian is a line or arc of longitude, which runs due north to due south. There are two types of meridians.

A terrestrial meridian is an arc that runs from the North Pole to the South Pole. The meridians as shown on today's maps and globes were first established in 1851 by Sir George Airy, who used a point at the Royal Observatory in Greenwich, England as the reference point of 0o longitude, now known as the Prime Meridian or the Greenwich Meridian. There are 24 standard meridians that occur every 15 degrees. Each of these meridians roughly correspond to the border of one of the standard time zones.

All meridians intersect lines of latitude[note 2] — called parallels — at right angles. When used together, meridians and parallels are the basis of the coordinate system used by geographers.

Guide meridians, in combination with parallels called baselines, are used by American geographers to establish private and public property boundary lines within 30 of the 50 states. This system was established in 1785 by the pre-constitutional U.S. government to make plats of lands located west of the Appalachian Mountains.

The government adopted the standardized platting system to replace the British system of metes and bounds. This older system, used in the original 13 colonies, is still used in those 13 states and in the states that were carved out of them (i.e., Vermont, Tennessee, Kentucky, Maine and West Virginia). Metes and bounds relies on local landmarks to establish townships and individual lots. (Texas and Hawaii, which were originally sovereign countries, continue to use the systems that were in place when the U.S. annexed them.)

Guide meridians are either named (like the Tallahassee Meridian in Florida) or numbered (like the Fourth Principal Meridian in Wisconsin, northeastern Minnesota and northwestern Illinois).

See the main article on this topic: Astronomy