Radionics is pseudoscience developed by the quack Albert Abrams (1863 — 1924). Abrams claimed that people all have an innate "frequency vibration" and that disease is caused when the vibration moves from "healthy" to "unhealthy." Radionics claims to be able to use blood, hair, a signature, or other substances unique to the person as a focus in order to reset the unhealthy frequencies to healthy ones.

The victim of the scam will have their blood placed on a bit of filter paper that is attached to a device called a dynamizer, which is attached by wires to a string of other devices and then to the forehead of a healthy volunteer, facing west in a dim light. By tapping on on his abdomen and searching for areas of "dullness", disease in the donor of the blood is diagnosed by proxy. Handwriting analysis is also used to diagnose disease under this scheme. 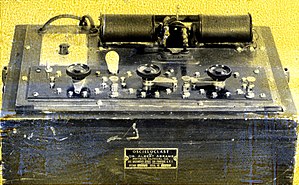 Having done this, the practitioner may use a special device known as an oscilloclast or any of a range of other devices to broadcast vibrations at the patient in order to attempt to heal them.

Albert Abrams developed thirteen devices claimed to detect such "frequencies" and/or cure people by matching their "frequencies," and claimed that they were sensitive enough that he could tell someone's religion by looking at a drop of blood. He became a millionaire leasing his devices, and the American Medical Association described him as the "dean of gadget quacks," and his devices were definitively proven useless by an independent investigation commissioned by Scientific American in 1924.[1]

My eyes! The goggles do nothing![edit]

Abrams died during the Scientific American investigations (after being unable to cure himself of pneumonia with his own device), leaving his amassed fortune to the Electronic Medical Foundation (EMF). In 1961, the FDA announced a criminal contempt action against the EMF and its president, Fred J. Hart. The charges were not contested and the organization was dissolved.[1]