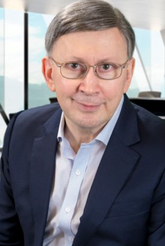 Monastyrsky is the author of Fiber Menace (2008), in which he attacks dietary fiber based on his personal experiences with irritable bowel syndrome.[1] The book was endorsed by the Weston A. Price Foundation, which explains a lot.[2] His research has been described as pseudoscience.[3][4]

Monastyrsky was born in Ukraine in 1954 and became a naturalized US citizen.[5] He has been described as a "trained pharmacist, burglar alarm installer, computer programmer and the self-proclaimed Russian Atkins".[6] In 1977, he says he graduated from a medical university with a pharmacy degree, but he does not give details.[7] His knowledge about nutrition is self-taught.[3] He offers a disclaimer, admitting he is not a medical doctor and his website should not be used for medical advice: "My books and essays aren't a substitute for qualified medical advice, and do not provide quick (or, in some cases, any) fixes."[8] This is contradicted by statements elsewhere on his website such as, "this site provides safe, effective, and natural solutions for resolving the nastiest kinds of constipations".[9]

Monastyrsky promotes a pseudoscientific fiber-free low-carb diet that he claims helped him cure irritable bowel syndrome. He advertises as an "expert" in forensic nutrition.[10] His evidence against fiber is anecdotal. Skeptic Eric Hall noted:

His website has been criticized for misinformation, such as misrepresenting statements from the Food and Drug Administration. For example, he made false claims that the laxative macrogol

("MiraLax") can cause neuropsychiatric events.[4]