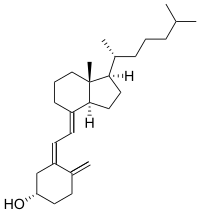 Vitamin D is a vitamin, and one of the essential nutrients for humans. We are able to synthesize it in our skin, via the ultraviolet-B in sunlight.[note 1] This is probably the reason why human populations in the higher latitudes have developed lighter-colored skins, since there is less sunlight available to synthesize vitamin D. The darker skin of those living closer to the equator, while protecting them more from the sun's more harmful rays, is not dark enough to inhibit sufficient vitamin D production in their homelands.

Much as iodine is added to salt to ensure a reasonable supply to prevent thyroid problems, vitamin D is often added to milk to address the fact that most people in the higher latitudes don't spend enough time in the sun, especially in their local winter (when the sun isn't strong enough to generate vitamin D in humans).[1]

This is all very simple and easy.

Some medical professionals who should know better claim that the majority of vitamin D synthesis takes place not in the skin, but in the eyes. Thus, they recommend looking at a sunlit sky, or even directly into the sun itself, as the sungazers do.

To avoid eye damage, they recommend you do this in the early morning or late afternoon, when the sun is low on the horizon. This is doubly questionable. If it's ultraviolet-B that stimulates production of Vitamin D, then early morning and late afternoon are lousy times of day because it's at those times that the slant angle of the sun through the atmosphere is the steepest. Compared with high noon, almost no ultraviolet-B gets through the Earth's atmosphere when the sun is low.

While reactions are created in the human eye by sunlight, these reactions are the simple, reversible pigment reactions in our rod and cone cells that allow us to detect light, dark and colour. It is unclear how the eye would be expected to synthesise Vitamin D, as the enzymes which allow the body to do this are only located in the keratinocytes of the skin.

It goes without saying, but there is no evidence of anything gained by looking directly at the Sun, and a huge body of extremely obvious evidence that doing so will blind you. Don't do it.

There are several schools of thought about what the correct level of Vitamin D intake should be, as can be seen in Mainstream dosage recommendations paragraph below. The advice given by the National Institute of health is that can be dangerous when taken at high doses (over 5000 I.U. per day), causing vomiting, kidney stones and even heart problems[2][3]. Other researchers in the field suggest that the NIH suggestions is based on poor research and that the RDA of 400 IU a day is out by a factor of 10 and should be approx 4,000 IU a day. They point to inverse correlations between the rates of various autoimmimmune diseases increasing every time the RDA level is reduced. Another issue is that Vitamin D is fat soluble so that there is an inverse correlation between how overweight an individual is and the level of Vitamin D in their blood. [4] Clearly there is a point where too much Vitamin D is dangerous, as anti-evidence-based medicine crackpot Gary Null found out first-hand when as a result of a manufacturing fault by Triarco Industries of New Jersey they created tablets containing 2,000,000 I.U. per tablet. He and 6 other individuals ended up in hospital as a result of this regime.[5]

Like all good woomeisters, vitamin D peddlers maintain that the reason their ideas aren't accepted by some major scientific organizations is a concerted effort by Big Pharma to discredit them.[6] If this were true Big Pharma would stand to gain significantly since a low blood level of Vitamin D would lead to a weakened immune system and thus the individual is much more likely to be affected by everything from viral and bacterial infections to autoimmune disorders, requiring long term treatment by Big Pharma.

The Marshall Protocol claims that vitamin D can be usurped by invading bacteria to suppress your immune system. This flies in the face of other research which supports a link between low vitamin D levels and an increased risk of infection.[7]

Vitamin D, like most vitamins, comes in multiple chemical forms. Vitamin D3 (cholecalciferol) is the form synthesized in the skin, and vitamin D2 (ergocalciferol) is ingested in the diet.

Both forms are available in vitamin supplements, but vitamin D3 appears to be the more effective of the two.[8] Don't be misled into thinking you need to go to a high-priced dealer to get esoteric vitamin D3 supplements, though; many if not most vitamin D supplements sold on store shelves are the D3 variety. Just be sure to read the label.

Vitamin D is needed for proper bone growth. Low vitamin D levels in childhood can result in rickets, which makes bones soft and causes severe inflammation of ribcage joints known as rickety rosary beads. The condition is excruciatingly painful and can cause extremely severe deformities, and even if someone later receives adequate vitamin D intake it may take surgery, sometimes quite extensive, to correct the damage from rickets. Among adults vitamin D deficiency can result in osteomalacia, commonly referred to as adult rickets, or contribute to osteoporosis.

A study[9] has found what it claims is strong evidence that 25-hydroxy vitamin D — also known as calcifediol or calcidiol, the vitamin D looked for in blood tests — is a negative acute-phase reactant

. That means its concentration goes down in response to inflammation.

As mentioned above, there's a growing body of medical literature showing that low serum levels of Vitamin D are associated with a variety of infections. A common assumption has been that this means Vitamin D deficiency might cause these infections; but if these infections come with an accompanying inflammatory response, the negative acute-phase reactant study opens up the possibility that Vitamin D deficiency isn't the cause of these illnesses but rather a consequence of them. If that's the case — note the "if" — then taking Vitamin D supplements might not do anything to improve one's resistance to these infections. These are preliminary results, though, and it would be a mistake to turn them into clinical practice at this stage without controlled trials.

The traditional U.S. Recommended Daily Allowance of Vitamin D is 400 I.U. per day for adults. However, the criteria have begun shifting. Current medical wisdom is to aim for a serum concentration of 25-hydroxy-vitamin D that lies within the healthy range. This concentration level can only be established by taking a blood test. If the patient's concentration is below the healthy range, supplements of 1000, 2000, or even 4000 I.U. of vitamin D may be prescribed.

Problems arise because the definition of the healthy range changes from one source to another.

As of 2011, the National Institute of Health sets the healthy blood concentration range as being from 20 to 50 ng/mL. Some articles in peer-reviewed journals, however, put the low end of the healthy range at 30-32 ng/mL; a review in the December 2008 Australian Family Physician even puts the low end at 40 ng/mL.