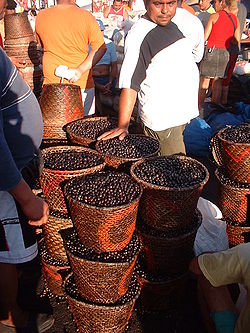 Berries for sale. If you don't buy some, that guy is going to make you an offer you can't refuse.

The Açaí berry is an inch-long reddish, purple fruit which comes from the açaí palm tree, which is native to parts of Central and South America. Like most palms, the fruit it produces is not a berry, but a drupe

(it contains a single, large, hard seed 7–10 mm across which constitutes the endocarp, surrounded by a thin, pulpy mesocarp[1]). It has very little in common with other wooful fruit like blueberries and cranberries.

Research into its dietary benefits[edit]

Some studies show that açaí fruit pulp has an even higher antioxidant content than cranberries, raspberries, blackberries, strawberries, or blueberries. These studies, however, are ongoing and there is not yet any conclusive data on its dietary benefits. Thus far, research has concluded that açaí berries have no benefits above any other berries.[2]

It tastes nice enough, if you like that sort of thing.

While there is still no conclusive research into the overall benefits of the açaí berry, it is often pushed as a New Age superfood for weight loss supplements[3] and you'll hardly find an organic food store without a few rather pricey bottles of its juice. Not awful, but an acquired taste. For example, see MonaVie.

The miracle diet woo also leads to it being a favourite subject for spam.

As with most woo, the fad aspect has reared its ugly head and pushed açaí out in favor of goji berries from South Africa.