From RationalWiki
(Redirected from Lacan)
Jump to navigation Jump to search 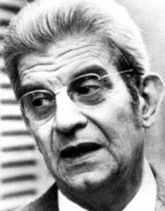 "There is something in you I like more than yourself. Therefore I must destroy you."

Jacques Marie Émile Lacan (1901–1981) was a psychoanalyst (and, in essence, a postmodern philosopher) in twentieth-century Paris. The vast majority of his career was dedicated to articulating, in famously obfuscatory language, a complex original model of the human psyche that he stubbornly insisted was simply a formalisation of Sigmund Freud's work. Whilst in clinical psychology his work is considered to be less than irrelevant,[note 1] his theories crop up all the time in other areas of postmodernism, particularly poststructuralism and critical theory, including in linguistics, literary criticism and political theory. Followers of Lacan insist that his work is simply psychoanalysis and refer to it as such, but in reality it has little to do with Freud's original work and its subsequent orthodox development.

In essence, his ideas are based on a fusion of Freudian psychoanalysis and structural linguistics, though the ultimate result is something that diverges quite wildly from the normal doctrines of either. Some of his few falsifiable claims have been explicitly disproven,[1] and Lacan was hostile to the notion that his ideas were subject to empirical proof, dismissing "general psychologists" as "Philistines" (i.e. people hostile or indifferent to culture and the arts) for considering the human mind to be within the realm of science, and outright attacking science for being too empirical.[2] Lacan argued, inter alia, that human infants only learn to distinguish between themselves and the outside world when they look in a mirror; that human reality was divided into three registers, the Real, the Symbolic and the Imaginary; and that "the unconscious was structured like a language."

Slavoj Žižek is a disciple of Lacan's, though it's unclear at best whether he actually understands Lacanian psychoanalysis or is simply banking on the (admittedly not unreasonable) assumption that the source material is so difficult to decipher that nobody is likely to notice if he blags it. One of Lacan's rather more qualified followers, feminist theorist Julia Kristeva, is almost as influential in postmodern and critical circles as the man himself.

Signifiers and the three registers[edit]

A particularly pervasive Lacanian concept is that of the three registers or orders: the Imaginary, the Real, and the Symbolic. According to Lacan, human reality is divided into these registers, and much of the really confusing woo in his psychoanalysis is based on this concept and on the unendingly overcomplicated interactions that supposedly take place between these register.

The Imaginary is "the realm of the Ego" and originates with the Subject becoming alienated from itself by identification with the specular image (i.e. by recognising that the person they see in the mirror is them). The Symbolic is a sort of cobbled-together mess using the structuralist linguistics of Ferdinand de Saussure and the structuralist anthropology of Claude Lévi-Strauss. Broadly speaking, the Symbolic is the set of rules and relationships of meaning in the outside world and society, which Lacan calls as the "Big Other". The Subject is introduced to the Symbolic via Lacan's version of the Oedipus complex, in which the Name-of-the-Father informs the child that she, he or they cannot become the object of their mother's desire and the child agrees to accept and internalise the rules of society. Lastly, the Real is that which is left out of the Symbolic (the lack in the Big Other); it is everything Other and alien to us that we are aware of not being able to perceive.

A closely connected concept is the Signifier. This is another concept Lacan bastardises from de Saussure. In de Saussure's linguistics, a "sign" was a basic unit of language, with both a sound-image (e.g. a word) and a concept to which that sound-image points; he termed these the Signifier and the Signified respectively. Lacan argues that the Symbolic is a network of Signifiers, and throughout his writings, Signifiers signifying other Signifiers or dividing Subjects by the process of signification or whatever else crop up all over the place. If you hear the word being used in postmodern theory in a way that doesn't seem to have much to do with de Saussure's linguistics, you can almost certainly blame Lacan. 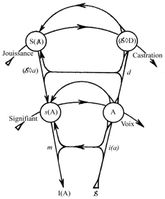 You can tell it's Real Science because it looks proper complicated. (But what about the Imaginary or Symbolic Science?)

In a classic case of physics envy, part of Lacan's attempt to formalise psychoanalysis was the introduction of what he called "algebra", which meant using letters and symbols ("algebraic signs") to represent his concepts and arranging them in pseudomathematical formulae he called "mathemes". According to Lacan, the main aim of this was to "prevent intuitive understanding" of his work.[3] He also explains that using algebra allows ideas to be communicated unambiguously without the "metonymic slide" of language, "to allow for a hundred and one different readings, a multiplicity that is admissible as long as the spoken remains caught in its algebra." That is — he wants his ideas communicated in a way that avoids the ambiguity of language, in order to ensure that multiple interpretations are possible. Make sense?

Lacanian algebra should not be confused, by the way, with Lacan's equally appalling abuse of mathematical concepts elsewhere in his work, usually for making shaky analogies. As Richard Dawkins opines, "We do not need the mathematical expertise of Sokal and Bricmont to assure us that the author of this stuff is a fake. A philosopher who is caught equating the erectile organ to the square root of minus one has, for my money, blown his credentials."[note 2]