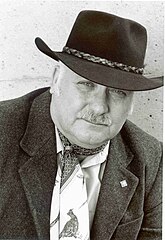 Stanley Coren (1942-) is a professor of psychology and a researcher of neuropsychology. As far as is known, he is fine in these areas and made genuine contributions to studying sensory processing, the effects and causes of left-handedness, and consequences of sleep deprivation. However, his actual claim to fame came in the 1990s when he fancied himself an animal behaviorist and wrote The Intelligence of Dogs, which attempted to analyze dog intelligence and rank the intelligence of different breeds of dogs.[1]

Despite his popularity, his "research methods" and method of determining dog "intelligence" were deeply flawed and a great example of junk science.[2] For one, he equates dog obedience with "intelligence", which is in-and-of-itself a very controversial proposal. Even worse is that much of his research consisted of interviewing just 200 obedience judges and asking them their opinion on which breeds were the most trainable. That's it. Furthermore, he doesn't even really try to quantify dog intelligence when it comes to instinctive intelligence, despite that supposedly being one of the three parts of dog intelligence.

Unfortunately, his ranking list of breeds remains popular for its simplicity and probably the fact that it's the first result on Google when looking up dog intelligence by breed.

This psychology-related article is a stub.
You can help RationalWiki by expanding it.
Retrieved from "https://rationalwiki.org/w/index.php?title=Stanley_Coren&oldid=2460060"
Categories:
Hidden categories: