A metaphor is commonly understood to be a literary device that equates a commonly known object with a more complex and abstract concept as a means to explain or elucidate that concept. Cognitive scientists see it as more than "mere" rhetoric and poetry (see below). In its simplest form, a metaphorical statement follows the sentence structures "object is a concept" or "concept is an object" - as in the title of the Pat Benatar song "Love is a Battlefield". This differs from a simile in that a simile compares — but does not equate — an object to a concept using the sentence structures "object is like/as a concept" or "concept is like/as an object", as in the first line of the Robert Burns poem/song "Red, Red Rose" — "O my Luve's like a red, red rose".

Metaphors in poetry and fiction[edit]

Authors often construct fiction and poetry around more complex metaphors that are not directly identified as metaphors. An example of this is the cast of anthropomorphized barnyard animals in George Orwell's allegory Animal Farm. Problems can arise, though, when authors construct more realistic, complex metaphors. Some readers may come to believe that events in metaphorical writings are not just real, but that they must also be believed to be real. One example of this is the "Parable of the Talents" in the bible. ("Talent" is an ancient Greek term meaning "huge honkin' chunk of gold or silver".) Two different official Gospel versions exist — Matthew 25:14-30 and Luke 19:12-28. Christian fundamentalists often favor the version in Matthew:

Since the first verse is a simile, the parable as a whole is a metaphor. The text never intended to teach the values of material or monetary wealth. If it had, it would say this directly, not illustrate it as a metaphor. Instead, Jesus was trying to illustrate to his disciples the need for them to expand their spiritual wealth by investing in the spiritual wealth of others, i.e. by evangelism. Yet many adherents to the prosperity gospel cite this parable as "proof" - not only of an interpretation of Jesus as an ardent capitalist, but also of the view that prosperity and poverty operate as signs of how much God loves or disloves an individual.[1]

One might well expect more respect from fundamentalists for parables, metaphors and imagery - especially since Scripture speaks of a fairly Important Topic - the origins of Man (male and female) - as "in the image of God" (Genesis 1:27 - "So God created man in his own image, in the image of God created he him; male and female created he them"). Not to mention the Gospels' penchant for parables.

Metaphors (and analogies) in Thinking and Science[edit]

Some cognitive scientists believe analogies are the “core of cognition” (Hofstadter), or the “key to explaining human intelligence” (Pinker). The idea that there's more to metaphor and analogy-making than mere rhetorics is old, but was revived in newer times by the cognitive scientists George Lakoff and Mark Johnson who wrote several books on the matter already in the 1980s. Why is that take attractive to cognitive scientists?

George Lakoff found that people seem to intuitively, and often subconsciously, grasp[2] and frame[2] ideas through metaphors, which bind together[2] a conceptual domain[2] (target[2]) and analogous conceptual domain (source[2]) allowing the target to be understood in terms of the source. Such metaphors are known as conceptual metaphors or generative metaphors, because once speakers “got it” they can easily generate numerous phrases in the same domain and listeners will intuitively understand them. At the same time, a situation is conceptualized in a certain way which frames[2] how we see it. This could have the severe implication in politics that voters of different parties see[2] reality through radically different lenses[2].

George Lakoff went on and listed many conceptual metaphors that permeate speech. To name a few:

People first use metaphors in novel ways and are understood because the listeners know the analogous situation and thus can apply the abstract ideas underneath the hood to the new situation (deep below seem to lie what is attempted to be conceptualized as "Force Dynamics" and which does feature antagonists, but alas not Darth Vader).

The first speakers might express themselves with “sort-of” and “so-to-speak” qualifiers to suggest that what they say is not meant literally. Over time, people get familiar with the metaphor and no longer see the metaphorical imagery. The metaphor may turn “dead as a doornail” (Pinker, 2008[5] via Shakespeare, 1597 via older sources ca. 1350). Just notice how many metaphors you've just read and you probably haven't noticed. Nothing literally “falls away” for example and of course nothing in thought is literally “deep” and there is clearly not literally a “hood”. And of course there is also nothing that is literally “clear”.

Let me draw your attention to Douglas Hofstadter and Emmanuel Sander (2013), who suggest that metaphors and analogy-making are like the engine of thinking (“analogy:thinking :: motor:car”), and not just a way to expand our understanding through metaphorical use. Observations first create a category of one. Subsequent perceptions that are deemed alike expand it into what we conventionally understand to be categories. With new additions, the categories get ever more abstract with an increasing number of perceptions and instances. This is the reason, they argue, why metaphors drop dead over time: the first uses are almost direct analogies but over time are applied more casually until the conceptual core is blurred out and the graded categorization emerges (with more or less prototypical members).

, the effect that according to IQ tests, people seem to get smarter. Consider an airport "hub", which is a complex idea that itself relies on complex analogies, e.g. hub:spokes::airport:flight legs. We can substitute ever more complex ideas in much shorter paragraphs or even keywords. If we were to explain a "wikipedia" to a medieval person, we would need a lot of time and patience to bring the concept across, and might start with "imagine a book of sorts...".

Quotationmarks indicate approaching a new domain in the conceptual space. A speaker may describe some new animal as a “horse”, which is a sorta-horse, but not exactly a real horse. This is the same process as above. This new creature might expand the graded category of “horse” with a new type and in the future people no longer call it “horse” (i.e. sorta-horse), but horse. Scarequotes are the reverse process. They reduce the term in quotationmarks to a sorta-status, as we move away in conceptual space from the concept. For example an expert becomes an “expert” (scarequotes), which of course means that they are not a real expert. 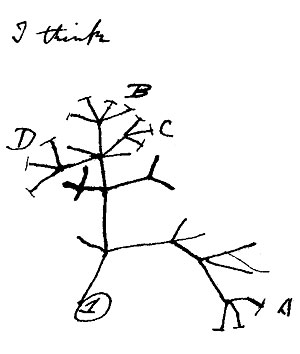 Darwin's famous tree of life scribble, a scientific metaphor
Cognitive scientists have pointed out that metaphor and analogy making played an important role in scientific discoveries, too. For example it was a analogy-leap that made Galileo pluralize the Moon to many moons. He had to see a tiny dot as analogous to one he already knew. At first he might have thought: "that's a sort-of moon there". And what would Charles Darwin be without his insight that species branch out from a common Tree of Life. Where would physics be without Huygens and Newton's ideas that light was like waves or tiny particles. Albert Einstein saw his ideas in analogous musical ways or as metaphorical imagery. There is of course not literally a “well” around massive objects, and they do not literally “pull” anything towards themselves.

Metaphors can of course also be misleading or hampering understanding since they are not necessarily analogous in every regard. They are like the map to a far more complex territory (which one must not confuse

): it shows impotant features, but does not warn you of every pothole that might strain your ankle. For example, the tree of life metaphor for evolution is not a good way to understand why humans wound up with Neanderthal genes, nor does it show what is known as horizontal/lateral gene transfer

. That's why such metaphors are useful, but usually more of a starting point in understanding a territory, and a reason why deeper understanding of the science tends to end up in math (where symbol manipulation is analogues to some state in the world in stunningly complex ways).

Cognitive scientists might be onto something. We might grasp maybe at some point what the complete role of analogy and metaphors are. This article only scratches the surface.