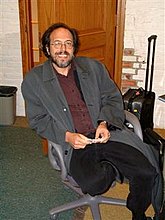 Lee Smolin is an American theoretical physicist, a faculty member at the Perimeter Institute for Theoretical Physics, an adjunct professor of physics at the University of Waterloo, in Ontario, Canada, and a member of the graduate faculty of the philosophy department at the University of Toronto.[1] He was part of a team that wrote the first equations on quantum gravity, an attempt to unify quantum mechanics with theories of gravity like Einstein's theory of General Relativity.

Through his book Three Roads to Quantum Gravity

, he establishes the claim that space is not empty but full of energy forming a discrete fabric. This fabric is described as a lattice of spin-networks by Roger Penrose, and through a series of loop quantum gravity equations by Carlo Rovelli.[2] This work was also expanded on by Nassim Haramein who describes the geometry of the fabric of space as intersecting Planck-scale spheres.

Luboš Motl considers Smolin an evil crackpot, as he does anyone failing to see the truth of string theory, but Smolin particularly pisses him off.