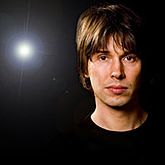 Your little sister probably had this picture above her bed. Now you do.

Professor Brian Cox is a very sexy physicist and popular science advocate born in Oldham, Lancashire, in the UK.[3]

By either accident or design, Cox started as a dreamy pretty-boy English pop idol who played to thousands upon thousands of screaming pre-adolescent girls by playing keyboards in Cool Britannia/Britpop band D:Ream (of "Things Can Only Get Better" fame, Labour's 1997 election anthem) in the 1990s and Dare (with Thin Lizzy's Darren Wharton) in the 1980s.[4] He returned to play keyboards on D:Ream's 2011 single "Gods in the Making"[5] but he's unlikely to tour with them again due to other commitments and the fact that after years of operating particle colliders, he's probably forgotten how to turn a keyboard on.[6]

After his pop career washed up when D:Ream disbanded in 1997, he returned to physics and got himself a doctorate. Before becoming a professor at Manchester University and a lead researcher for CERN. He has since gone on to do huge amounts of science advocacy and presenting on television and become much more famous than he was in his previous career. At his present age (54) he has no business looking as young and attractive as he does.[7] Basically, he has lived the life every self-respecting nerd desires.

After finally returning to physics, Cox found himself as a lead researcher at CERN, putting him in a great position to do lots of interviews talking about his work in the run up to the Great Switch On of the Large Hadron Collider. His first forays into TV pop science included the BBC's Horizon programme, headlining on the episodes "The Six Billion Dollar Experiment," "What on Earth is Wrong With Gravity," "Do You Know What Time it Is?" and "Can We Make a Star on Earth?" Since November 2009, Cox has also been co-host of BBC Radio 4's The Infinite Monkey Cage with comedian Robin Ince - a "[w]itty, irreverent look at the world through scientists' eyes" - and has also worked with Ince as part of Nine Lessons and Carols for Godless People.[8]

In January 2011, he and comedian Dara Ó Briain hosted the BBC's Stargazing Live, where they both lived the dream by acting like small children looking at planets and meteor showers. He has mentioned that he would like to give a proper lecture, rather than just the sights-and-sounds spectacular of Wonders, but added that it would probably just be shoved onto BBC Four.[9] This was mostly realised in December 2011 when he gave a televised lecture on the basics of quantum mechanics (complete with a blackboard) in front of various celebrity guests who also participated in some demonstrations - and we all got to see Jonathan Ross struggle with elementary mathematics.[10] 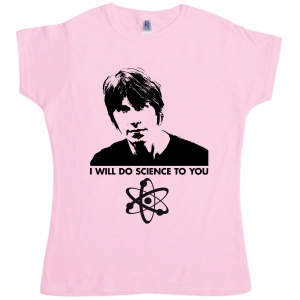 In 2010 Cox presented and narrated Wonders of the Solar System, in which he seemingly blew most of the BBC's budget on traveling to exotic locations to eloquently explain the wonders of the solar system. This included a solar eclipse seen in India and looking at massive glacial fields to demonstrate how the ice crystals of Saturn's moons are arranged. He also focused on the vast differences between the many moons in the solar system and how they differ in the potential to support life.

In 2011 he followed the series with the equally flashy Wonders of the Universe. This included insights into time, space, gravity and the origins of matter but there was also some behind-the-scenes banter to go with it. The series and Cox himself were criticised in the Telegraph by Brendan O'Neill for not making humanity special enough and trying to convince us all (in that way all Evil Atheists do) that we were nothing.[11] Cox responded passionately both via Twitter and in O'Neill's comments section, stating that the writer had spectacularly missed the point - many others were equally unimpressed, because if being made of stardust, and being tiny bits of carbon evolving on a rock yet still being able to decipher the mysteries of the universe wasn't mindblowingly awesome you probably don't have much to live for yourself. Numerous complaints were also sent into the BBC regarding the soundtrack to the series, which was stated to be too loud for many viewers. The show was then remixed for the second episode with the music noticeably quieter and far less epic, much to the chagrin of Cox who said that Wonders is piece of cinema, not a lecture. A counter protest was formed via Facebook[12] and successfully managed to skew a poll in the Guardian to show 82% of people in favour of the original soundtrack.

Cox announced via Twitter that the next series is slated for broadcast in 2012, this time called Wonders of Life - implying that he could be muscling in on David Attenborough's territory. The show is expected to carry on in the same manner as its two predecessors, with Cox standing on mountain tops looking epically into the distance.[13] Never one to miss the opportunity to make a sly jab at cranks, Cox also added via Twitter: "Notice I say '#wonders of life will be with you in 2012' - because the world is NOT going to end - just sayin, if you're a nobber."

Cox has been a noted promoter of science, and especially government funding for it. On practically every interview he does he mentions it. His talks for TED include "why we need explorers," which explores the need for good science funding and highlights the minuscule proportion of UK funding that was spent on science, despite the massive amount of money that science churns through the global economy.

Naturally, he opposed the 25% cut to UK science funding demanded by the former Tory–Lib Dem coalition government. During the general election, Cox appeared on Channel 4's Alternative Election Night to discuss the state of UK science funding, why our own stupidity is the biggest menace we face, and how the Large Hadron Collider is emphatically not going to suck the world into a black hole. Indeed, in a Radio Times interview he expressed a belief that anyone believing that the LHC is going to kill us all is a twat.[2]