From RationalWiki
(Redirected from Leibniz)
Jump to: navigation, search 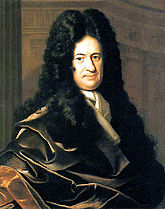 I hope that is a wig.

Gottfried Wilhelm Leibniz (1646–1716) was a German diplomat, and polymath with multiple important contributions to mathematics and philosophy.[1]

Leibniz invented[notes 1] discovered calculus independently of Sir Isaac Newton. As a consequence of his quest for the appropriate symbols to represent ideas, Leibniz introduced the notations (such as

for integrals) that are still used today.[1] Newton's dot notation

, on the other hand, is more commonly used in physics, for example, to represent the time derivative. In fact, some expressions, such as the Euler-Lagrange equation

, are most conveniently expressed using both Newton and Leibniz's notations. Also note that while the stylized s is universally used to represent an integral today, people still use different notations for the derivative. Joseph-Louis Lagrange used the prime notation

while Leonard Euler used the letter

, treating it as a linear operator. For partial derivatives, Gustav Jacob Jacobi employed the stylized d that resemble the number six in reverse

,[2] which may be thought of as an extension or modification of the Leibniz notation. Unfortunately, however, Newton and Leibniz engaged in a prolonged and bitter but ultimately pointless priority dispute. We now know that Newton formulated his own version of calculus first, but published later as he despised controversies. Leibniz, on the other hand, arrived at his later but published first. We also know from historical records that before the dispute, the two communicated with each other about Newton's work on the binomial theorem. [3] It is intriguing, but ultimately fruitless, to speculate on what might have been if the two cooperated and there were no priority disputes.

While Newton preferred to think of transcendental functions as infinite series to be differentiated or integrated term-by-term, Leibniz treated functions in a much less messy manner. Like Newton, Leibniz began by considering infinite series. But unlike Newton, whose starting materials were Euclidean, geometry, Cartesian geometry, and the work of John Wallis, Leibniz had his entryway via the differential triangle of Pascal.[1] He unearthed the Product and Quotient rules of differentiation. One can generalize the Product Rule using mathematical induction to arrive at the General Leibniz Rule, which gives a higher-order derivative of a product of two function and is most conveniently expressed using the binomial notation.[4] Knowing how to differentiate the products and quotients of functions, Leibniz moved on to composite functions and discovered the all-important Chain Rule. Newton independently discovered it via substitution.[1] Given the fact that he independently came up with the Fundamental Theorem of Calculus, it is no surprise that he also introduced the Leibniz Rule for Differentiating Under an Integral Sign, or simply the Leibniz Integral Rule.

Alongside James Bernoulli, Leibniz showed us how to solve what we now call separable ordinary differential equations (ODEs). His use of differentials definitely paved the way.[1] Taking advantage of the Product Rule, he introduced a technique to solve a slightly more complicated class of ODEs called first-order linear equations known as an integration factor. When James Bernoulli challenged other mathematicians to solve the brachistochrone problem, a classic in the calculus of variations, Leibniz responded with his own correct answer, independently of Newton and a few other mathematicians. His work with infinite series led Leibniz to a beautiful[citation NOT needed] formula for

[1] that we today typically derive using the Maclaurin series of the inverse tangent function.[3]

The Metaphysics of Leibniz is most famous for his assertion that everything in the material universe consists of monads, which are a physical manifestation of God.[5]

Leibniz was also a Lutheran apologist who, in his Essais de Théodicée sur la bonté de Dieu, la liberté de l'homme et l'origine du mal ("Theodical Essays on the Goodness of God, Liberty of the Person, and the Origin of Evil") claimed we are living in the best of all possible worlds, which Voltaire satirized as the character Pangloss in his Candide.[6]

This philosophy-related article is a stub.
You can help RationalWiki by expanding it.
Mathematics Articles on RationalWiki