From RationalWiki
Jump to navigation Jump to search
Were you looking for Pyramid scheme?

The Great Pyramid of Giza

A pyramid is typically a five-sided three-dimensional object, though four-sided is not uncommon. The majority of the sides are triangular in a five-sided pyramid. One angle from each of these triangles meets at a point (this is considered "top"). The fifth side is a square. Four-sided pyramids have triangles for all four sides. The regular tetrahedron, a Platonic solid with four faces, takes the shape of a pyramid with equilateral triangles for its base and sides.

There are some rather famous pyramids in Egypt. They are huge stone structures that were built (by flesh-and-blood human beings who were mostly not slaves[1] and certainly not extraterrestrials[citation NOT needed]) as the tombs for ancient pharaohs.

Some people believe pyramidal structures have special powers, for healing, calming, focusing spiritual energies,[2][3] growing and preserving food,[2] or sharpening razor blades.[4][5] You can even buy pyramidal frames to wear on your head.[6] While whatever someone thinks helps them meditate is fine, they should keep in mind that there is no basis in reality for these beliefs.

Some woo merchants ascribe the building of ancient pyramid structures by geographically isolated peoples as being evidence for the mystical nature of pyramids. Erich von Däniken belongs to the select group of fools claiming that the pyramids (Egyptian and Mesoamerican) were built by outsiders, such as Atlanteans or aliens.[7]

Another common rationale for pyramids having been built with the help of aliens is: How could an ancient civilization have built something so grand with such limited tools? Problem is, that line of thought falls into a gross underestimation of human ingenuity – we've achieved more sophisticated feats of engineering having developed the right tools, but any human achievement is staggering and improbable if you don't consider the history of its development.

Claimed connection to myths in the Bible[edit]

The Bible makes no mention of the Pyramids, but this has not stopped imaginations from drawing connections with the biblical narrative about the Israelites in Egypt, likely due to laypeople conflating the two things they know about ancient Egypt. Standard chronology dates the building of the most prominent pyramids from about 2700 BCE to about 2100 BCE.[citation needed]

Ussher's creationist chronology has these relevant dates: 2348 BCE for The Flood, 1921 BCE for the call of Abraham, 1491 BCE for the Exodus. This places the era of pyramid-building to include the Flood, which would have been rather inconvenient for their builders. And it is even more difficult to reconcile with the tradition going back to Titus Flavius Josephus that the pyramids were built by Israelite slave labor shortly before the Exodus. Some creationists (including at least one US presidential candidate)[8] have claimed that the pyramids were, in fact, grain stores — which raises some questions about the purpose of their internal structure and decoration.

There is also a question about the energy source used by the Twelve Tribes as they migrated across the Sinai Desert following the Exodus from Egypt. Obviously, they had some way of totally vaporizing the garbage of two million people, include metallic and ceramic waste, because diligent modern archaeologists have been unable to find any evidence of their passage. Whether there was some way of directing a beam of awesome energy from the Great Pyramid onto a reflector shield of a hovering Mother Ship, and redirecting down onto the altar of the Tabernacle or some other rubbish heap, sublimating every last atom, or some other method, has yet to be scientifically investigated. 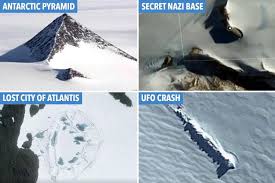 Google Earth was a mistake.

Since the first missions to Antarctica early in the 20th century, there have been stories about a mysterious pyramid discovered on the chilly continent near the south pole. British explorers in the early 1910s found a pointy rock and named it the Pyramid and included it on their maps; this rock has sometimes been the object of theories about secret pyramids despite it not being at all secret.[9] From 2012 to 2016 a new round of rumours spread, linked with photographs that show something apparently in Antarctica with regular triangular sides.[10] Skeptics have questioned the pictures, suggesting they may show a natural structure photographed in a particularly flattering way.[11]

The rumors were linked with a couple of famous visitors to Antarctica in late 2016. John Kerry made an uneventful November 2016 trip to Antarctica just when Donald Trump was sweeping to electoral victory.[12][13] In contrast, shortly after he was medically evacuated from Antarctica on Dec 1, 2016,[14] astronaut Buzz Aldrin is rumored to have tweeted "We are all in danger. It is evil itself." along with a picture of the Antarctic ice pyramid - and then he rapidly deleted it.[13][15][16] The precise date of the tweet isn't known, but it was being reported on 7 December. It's not entirely clear what's going on here, although Aldrin is noted both for his sense of humor and intolerance of conspiracy theorists. It's also not obvious why you would fly Buzz Aldrin to Antarctica to investigate a mysterious pyramid.

At a quick glance, it may seem odd that cultures as diverse as the Mayans and the Egyptians would build oddly similar structures. Both cultures were inspired by religion, but the usage and construction techniques varied.

Physics determines the stability of a structure[edit]

Quick experiment: Try to stack four oranges together. What's your first instinct on how to do this? Illuminati confirmed.

Jokes aside, ancient peoples chose the approximate pyramid shape because it was the one most suitable for the building of large structures, based on materials available at the time. Go in to your garden and try to build a structure made of earth as high as your waist. The easiest way to do this is to build a mound, or something similar to a pyramid. We can determine this with a few hours spent digging in the garden, so is it unrealistic to expect that ancient engineers could achieve a similar realization without requiring assistance from aliens or Atlanteans?

A comparison of Mesoamerican and Egyptian pyramids reveals clear differences in their respective designs. Mesoamerican cultures normally built step-pyramids, where the tiers are clearly visible. Egyptian pyramid design began with step pyramids, transitioning to forms that had a smooth finish by addition of a limestone casing. The underlying steps are visible where the limestone casing has eroded or been removed, as has happened to the Pyramid of Cheops. 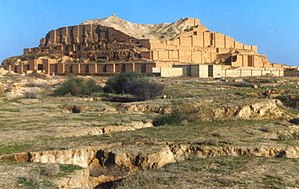 As is the case with biological evolution, similar traits can independently evolve. The appearance of the wheel could be ascribed to Atlanteans seeding geographically isolated cultures with the invention, or one could reason that a round shape is the most efficient choice for the construction of wheels. Given that the ancient engineers were facing the same physical constraints, it's reasonable to assume that they may converge on a similar solution.

Pyramids did not simply appear in their final forms. A study of the pyramids of Egypt and Africa reveals a clear progression from the mastaba, typically single-tiered structures, to the Pyramid of Cheops — and the intervening structures.[17] Early pyramids, such as the Step Pyramid of Djoser

, resemble a series of mastaba stacked on top of each other, with each tier being smaller than the one below it. Hey, isn't it odd that the tallest and most stable hills and mountains tend to have a relatively smooth gradient?

The development of pyramid building techniques is comparable to the progression of skyscrapers. The Empire State Building did not simply spring into existence in one piece.[citation NOT needed] Prior to its completion, the Eiffel Tower was the tallest human-made construction in the world. There is ample evidence of this progression, right back to the crude buildings of pre-history.

Differing motives and uses of pyramids[edit]