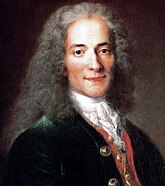 Another helping of grilled butt cheek?[1] Why, yes, I'd love some.

François-Marie Arouet (1694–1778), better known by his "trade" name Voltaire, was a poet, playwright, novelist, historian, and philosopher who embodied the Enlightenment in eighteenth-century absolutist France. Voltaire was an Anglophile, and was instrumental in bringing the works of Newton and Locke from England to French intellectual circles. He is widely considered one of the greatest and most gifted Enlightenment writers.[3]

As self-proclaimed deist, Voltaire loathed organized religion and intolerance between creeds. Strong anti-clericalism pervades most of Voltaire's writings. He believed that all religions attempt to teach morality and that all are based on just precepts — it is only the particulars of religious beliefs that are "absurd." As a deist, he was a supporter of the "clockmaker" argument for the existence of God. Voltaire despised superstition and optimism, themes that surface in the novel Candide, his most widely-known work. Voltaire subscribed to the revolutionary Enlightenment notion that "custom is a greater decider of difference than nature," a principle that still holds for today's anthropologists and all who practice multiculturalism.

That said, no man is perfect. Voltaire was also a virulent anti-Semite,[5] referring to the Jewish people as "calculating animals," "plagiarists in everything," and "the biggest tramps who have ever spoiled the face of the earth."[6] He was also a Eurocentric racist, a critic of Islam (some people take that to be Islamophobia) and derided Africans as "less intelligent than apes." In A Pocket Philosophical Dictionary he denounced the Egyptians as being "contemptible" and argued that their characters were fundamentally flawed simply because he disagreed with Egyptian governmental policy regarding slavery. Jeez, Volty. Everyone today would have loved you if it wasn't for that.[notes 1]

A paraphrased version of this statement ("To learn who rules over you, simply find out who you are not allowed to criticize") has been widely misattributed to Voltaire. The actual quote is from neo-Nazi and Holocaust denier Kevin Alfred Strom.[8][9][10]

A thorough search of his writings has never turned up his saying that while he disagrees with someone, Voltaire defends his right to say it. The quote was falsely attributed to him due to the fact that its creator, Evelyn Beatrice Hall,

was a woman. Hall wrote it as part of a biography on him, and few to this day grant her credit as its creator.