It is, of course, a well-known fact that fifth century Greco-Egyptian scientists were all redheads who went about in their birthday suits.

Hypatia of Alexandria (370–415 CE) was a scientist, inventor, and philosopher. She is also the first female mathematician whose life is well recorded.

Her father, Theon, was also a mathematician and philosopher, associated with the Musæum (a pagan temple-cum-philosophical school), and assisted her a good deal in getting her started in her work. He personally taught her in the arts, literature, mathematics, science and philosophy, pretty much everything he knew. She was best known as a teacher, eventually becoming the head of the Alexandrian neoplatonic school.

She was known for being very eloquent and virtuous, easily able to hold her own among men. The rationalist minister M. M. Mangasarian described her thus:

She went to some trouble to remain unmarried. It happened at one point that one of her students got the idea that he was in love with her, and told her about it. Hypatia responded by handing him a menstrual rag, saying, "You love this, O youth, and there is nothing beautiful about it." This brought the youth promptly to his senses.[note 1][citation needed]

There is no record of her having been present when the Serapeum, a temple to the Greco-Egyptian god Serapis where some Iamblichean Neoplatonic philosophers often taught, was destroyed as the result of a street battle between Christians and pagans about the time that pagan rites were outlawed through the Roman Empire in 391 CE.

The closest to a contemporary record of her death is the Historia Ecclesiastica, written by the church historian Socrates Scholasticus about 25 years after the fact. This chronicle relates that around the time of Hypatia's death, the patriarch Cyril drummed up a large mob, which then proceeded to run Alexandria's Jews out of the city. The Jewish population of Alexandria was quite sizeable, and had been there for a very long time; Orestes, dismayed that this large portion of the city's population had been expelled, wrote to the Roman emperor to complain.

Later, at church, Cyril tried to make peace with Orestes by extending a Bible toward him; but Orestes refused to be reconciled. Hypatia was seen by many of Cyril's supporters as being the cause of the continuing dispute:

Of this heinous act of torture and murder, the journal Free Inquiry commented:[4] "Christian leaders… chopped up her body and burned her limbs, torso, and her very recently detached cranium, flowing with lush locks, plopping all onto their pious bonfire — all this to make sure, I suppose, that not only was she merely dead but really most sincerely dead."

She wrote a number of commentaries on what were then the great works of arithmetic, geometry, and astronomy. Her writing helped clarify these topics for newcomers. Part of her commentary on Diophantos's Arithmetika has survived through an Arabic translation.[5]

Contrary to popular belief, Hypatia did not invent the hydrometer or the plane astrolabe and there is no evidence that she ever considered heliocentrism viable. The misconception that she invented the astrolabe comes from a misreading of a letter by her pupil Synesios, the bishop of the city of Ptolemaïs, in which he describes how she taught him how to make an astrolabe. The misconception that she invented the hydrometer comes from a different letter by Synesios requesting that she make one for him. Both of these devices are, in fact, known to have been invented long before Hypatia was born; she merely knew how to construct them. The idea that Hypatia found evidence to support Aristarchos's heliocentric model of the universe is a piece of pure fiction made up for the 2009 film Agora.[5] 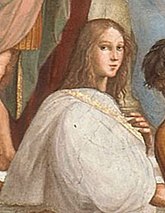 Detail of the alleged "Hypatia" from Raphael's The School of Athens.

There is a widely circulated claim on the internet that Hypatia is depicted in the painting The School of Athens by the Italian Renaissance master Raphael. There is a figure in the painting that superficially appears to be a woman, but there are no serious scholarly sources that ever mention anything about this figure being possibly identified as Hypatia. In fact, H. J. Mozans (John Augustine Zahm) specifically regrets that Hypatia doesn't appear in the painting in his book Women in Science.[6]:141 Ironically, the figure in the painting often claimed to be Hypatia is probably not even a woman at all, but rather an adolescent boy with long hair, which was the common fashion in Italy during the time period. It may be a depiction of the philosopher Giovanni Pico della Mirando. The seventeenth-century art critic Giovanni Pietro Bellori claimed that the figure represented the young Francesco Maria I della Rovero.[7][8] It is possible that the figure may have indeed been intended as a woman, but as the personification of the Greek philosophical concept of Ἀρετή, meaning "Virtue" or "Excellence," not as Hypatia of Alexandria.[9]:65-66 It is unclear where exactly the urban legend about Hypatia being in the painting originates from, but it seems to have possibly originated on the internet. (What? And here all of us thought that everything on the internet was true!)

The story of Hypatia has been continuously subjected to distortions in the retelling.

Every Christian writer from within a century of Hypatia's death speaks highly of her and ill of her murder.[5] Socrates Scholasticus praises Hypatia and deplores her murder, writing:

"This affair [i.e. Hypatia's murder] brought not the least opprobrium, not only upon Cyril, but also upon the whole Alexandrian church. And surely nothing can be farther from the spirit of Christianity than the allowance of massacres, fights, and transactions of that sort."[10]

The church historian Philostorgius likewise praises Hypatia highly, saying that she surpassed even her father at mathematics, and expresses shock and disbelief at reports of how she was killed.[5]

After a few centuries, though, figures within the Church started trying to whitewash the behavior of their own people. John of Nikiu, a Coptic Orthodox bishop living two centuries later, wrote approvingly of the murder, stating that Hypatia was an evil witch, guilty of such satanic wiles as using astrolabes and playing music, and that the reader Peter was "a perfect believer in all respects in Jesus Christ."[11]

There is some speculation that another few centuries on, the story was ripped off to be used in the hagiography of St. Catherine of Alexandria, after whom the famous monastery at Mount Sinai is named.[12]:441 This hagiography, in true psychologically projective form, relates the tale of a highly virtuous Christian female philosopher/scientist who is murdered by pagans when she objects to their practice of their rites.[13] The Catholic Church now recognizes that this hagiography is dodgy and has removed St. Catherine of Alexandria from the general calendar. 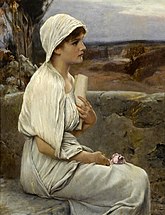 This really is meant to be Hypatia. Honest! And she's even got her clothes on.

More recently, there have been some distortions from the other side, also trying to portray her death as something other than a philosopher caught in the crossfire of political bickering. After the Protestant Reformation, some writers used her story as an example of Catholic intolerance, distorting facts so as to lay all the blame on Cyril or on the Church. Still later, in the Romantic era, it was reduced on several occasions to a parable of classical learning vis-à-vis Christian ignorance and anti-intellectualism.[5]

Ironically, Hypatia, the sharp-minded rational philosopher and scientist, has become an object of veneration for certain New Age woo-peddlers; for example, Pamela Longfellow, alias Ki, has written a novel entitled Flow Down Like Silver, Hypatia of Alexandria,[14] part of a trilogy dealing with gnosis of the "feminine divine." Longfellow, who somehow got the idea that virginity as a virtue was a Christian invention, pitched most of what is known about Hypatia out the window and imagined her as a New Age-style mystic working toward the "deeper truer purpose" of "the transmutation of the spirit." In support of this hypothesis, she provides the evidence that all the chroniclers writing about her were men.[15]