Cutaneous lesions of leprosy in hand

Leprosy (also known as Hansen's disease) is a curable bacterial disease which primarily affects the upper respiratory system, nervous system and mucosa. The disease is caused by the bacteria Mycobacterium leprae, a cousin to the bacteria that causes tuberculosis.[1] The disease (or at least an almost identical disease) also has an animal reservoir in armadillos.

The earliest recorded instance of a leprosy-like disease was discovered on an Egyptian document, written on papyrus, the age of the writings are estimated around 16th century BCE. Writings from India, dated approximately 600 BCE describe a disease with symptoms that bear resemblance to leprosy.[2]

Affecting only a small number of animals, the disease is believed to be transmitted via mucous droplets from the nose and mouth. After an incubation period lasting between two and ten years, skin lesions begin to appear on the affected animal.[3] If left untreated, leprosy can lead to nerve damage causing loss of feeling in limbs, blindness, hair loss and loss of control in hands and feet.[4]

In modern times, treatment for leprosy has undergone several changes. Previous to modern medicine, people would try various folk cures, such as a drink made of rotting snakes.[5] From the early 20th century CE until the late 1940s, patients were given painful injections of chaulmoogra nut oil,[6] with some patients reporting short-term benefits. Early in the 1940s, a drug known as Promin was introduced as a leprosy treatment. Treatment with Promin, while effective, required painful and ongoing injections. During the 1950s, Dapsone was used to prevent multiplication of the leprosy bacteria hence stalling its progression. While effective at first, the Mycobacterium leprae bacteria became resistant to the treatment.

In 1981, the World Health Organization recommended the use of multidrug therapy (MDT). MDT has been the common treatment since its recommendation, saving millions from leprosy.[7] The treatment for leprosy is commonly a combination of the drugs dapsone, rifampicin and clofazimine. Treatment for leprosy has been offered free of charge by the World Health Organization since 1995. After initial treatment, the patient is no longer considered contagious and is usually cured within twelve months. If treated early enough after initial symptoms, it is possible to avoid disability. Chances of relapse are considered statistically insignificant.[1] 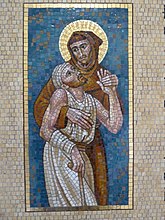 Mosaic of Saint Francis of Assis and the Leper

Sufferers of leprosy (lepers) in the Third World are commonly forced to leave their communities and join what are referred to as "leper colonies". In many places in the world, lepers are seen as unclean or cursed. To this day, what began as a leper colony largely remains one as Kalawao County

The Bible makes numerous mentions of a disease which many believe is leprosy, a claim disputed by many theologians and doctors who believe that the confusion is the result of poor translations from Hebrew to Greek to English (especially since the symptoms the Bible describes are not consistent with modern definitions of the disease)[8]. One of the mentions of this disease instructs sufferers to live alone, tear their clothes and yell "Unclean! Unclean!".[9][10] One of Jesus' abilities was said to be a magical method of healing leprosy and the associated blindness, Jesus was also said to allow his disciples to heal leprosy in his name. However, some ex-lepers weren't as thrilled since they lost their ability to solicit alms.

The disease that the Bible describes is probably not leprosy (the Hebrew term is tzaraat[11]). This may have contributed to some misconceptions about the disease, some of which include:

In Chronicles, King Uzziah is punished by God by means of this disease. This has led many Christians to believe that leprosy is caused by God, and faith in God is enough to cure it. There are yet to be any documented cases of divine intervention curing leprosy. As usual, this doesn't stop people from crying for such intervention. [12]

A common misconception is that leprosy causes limbs and extremities to simply fall off, this is not the case. Instead the disease kills nerve cells capable of sending pain messages to the brain from the extremities. If an infected person gets injured, he or she may not feel the pain and properly treat the wound. The result is an infection, gangrene, and loss of the afflicted extremity.[4]