From RationalWiki
(Redirected from Theologian)
Jump to: navigation, search

Theology is — in a literal etymological sense — the study of God. In practice it involves the intellectual study of the assumed divine,[2] of the nature of man within the context of some religious doctrine, and of religious "truths" from the position of a believer within a particular religion. Theologians - the gurus of theology - seek to improve their subjective understanding of divine revelation to better understand the divine. Theology differs from, but is closely related to, other disciplines such as religious studies which attempt to analyse religions and beliefs objectively. 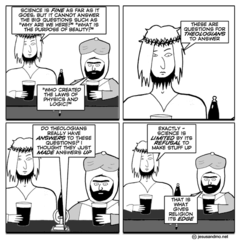 Imagine two nerds arguing about which would win in a fight: the Enterprise or a Star Destroyer.[4] And then imagine that they were part of groups that had been arguing over these questions for centuries and had exhaustively documented everything. Finally, imagine that some of them considered what they were arguing about to be things that not only actually existed, but were literally more important than life and death (others just enjoy arguing). Madness? This. Is. Theology!

One of the roles for theology is determining what beliefs are to constitute the official doctrine within a religion at any given time. Early Christian theologians, for example, devised doctrines such as absolution, transubstantiation, purgatory, original sin, and the Holy Trinity, which are based on tenuous interpretations of Bible scripture rather than things clearly expressed in the Bible. Nevertheless, these remain major elements of Christian theology (especially within Catholicism).

These differing views on theology often cause schisms, when the standing body of a religion cannot agree on what theological views will be official doctrine. The most obvious example of this is the major split between Roman Catholic and Protestant Christians, during the Protestant Reformation. Protestants rejected many aspects of Roman Catholic theology and dogma, claiming it has little grounding in the Bible. The other major historical schism between Roman Catholics and the Eastern Orthodox Christians was equally steeped in theological differences. 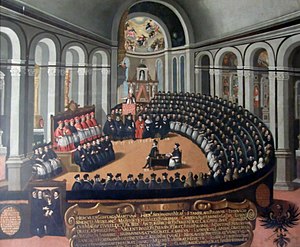 The Council of Trent meets to determine the Catholic Church's response to the Protestant Reformation.

Modern theologians have to address science in the context of theology, creating a host of possibilities.

At least one organisation/journal exists that attempts to deal with the interrelation between theology and science.[11]

Theology and philosophy are very closely related to each other though philosophy does not start from faith-based concepts. Many philosophical schools have influenced theology and vice versa. In the middle ages the two concepts were nearly inseparable and more modern theologians such as Soren Kierkegaard have had profound effects on many philosophical schools. This is especially true when it comes to questions such as free will or whether life has meaning.

While it is possible to get a degree in theology from any number of world-class universities - including Oxford, Yale, Harvard, Howard, and the University of Chicago - critics dating back to the eighteenth century have questioned the merits of theology as an academic discipline.[12]

Theology is often criticized from people who are not believers. "What is the point of trying to study something you cannot even prove exists, using texts that are dubious at best (perhaps out-right frauds at worst), simply reinforcing the few remaining issues about the spiritual and natural world that have not been resolved by science?".

In 2012, atheist philosopher Maarten Boudry committed a Sokal-style hoax against a theology conference[13] by submitting an intentionally absurd abstract, under an anagrammatic pseudonym,[14] that was promptly accepted.[15] Conference abstracts are not subject to peer-review, so getting this sort of material under the radar isn't as difficult as it might seem - and should a conference be desperate for the numbers, they might just accept any old rubbish to fill the slots. Yet, even a casual read-through of Boudry's abstract shows it to be clearly a load of nonsense. The opening sentences form a semi-coherent screed about Darwinian evolution:

In the Darwinian perspective, order is not immanent in reality, but it is a self-affirming aspect of reality in so far as it is experienced by situated subjects. However, it is not so much reality that is self-affirming, but the creative order structuring reality which manifests itself to us.

Boudry even managed to shoehorn Dawkins' name into the abstract, too, suggesting that we should "reframe our sense of locatedness of existence within a the space of radical contingency of spiritual destiny"[sic] — which is, somehow, contrary to Dawkins' own assertions. The lesson to draw from this? sometimes, "expertise" really means "using big words," and it doesn't take much to impress people who are eager to have their own views reinforced no matter what. As Jerry Coyne noted:

I defy you to understand what he’s saying, but of course it appeals to those who, steeped in Sophisticated Theology™, love a lot of big words that say nothing but somehow seem to criticize materialism while affirming the divine. It doesn’t hurt if you diss Dawkins a couple of times, either.

Theology is by believers for believers, so the average logical non-believer (and many average, logical believers for that matter) needs to be prepared to do a lot of head scratching if they want to understand a given theology. Note well, if you are trying to stir the pot, prove "your theology is wrong", or bring up new points, with the 2000+ years in Christian theology, and the 4000+ years in some other theologies, that's not too likely.

Why would anyone other than an academic-minded believer want to study theology? It can be extremely helpful in dealing with people of other cultures, especially if the rulers are theocratic. Understanding theology can help if you are working with people moving from one religion to another,[16] or moving out of a religion altogether, as it can prepare you for questions they might have, or concerns about the future. It might even be a simple source of amusement as one shakes one's head saying, "Ok, you think what now?" But theology can be taken seriously by believers, to the point that they can kill or die over their own religion's views of theology.

The first step to understanding any theology is to have a rough understanding of the tenets of a religion, and why one religion has separated from sister religions. If you do not understand, for example, the basic differences between Catholicism and Protestant Christianity, the minute details of the theology will likely escape you.

The next step is to have a familiarity with the various holy texts. It's not essential to read them too carefully, nor even cover to cover, since theology frequently exists outside of the holy texts, often only vaguely being grounded in the holy texts (despite endless claims otherwise). If you want to be armed from an atheist point of view, about problems with the holy texts, you can read commentaries like the Skeptic's Annotated Bible and the Skeptic's Annotated Qu'ran,[17] both of which treat the holy texts as just texts, pointing out things like logical inconsistencies in the text. They are not overly relevant, however, to understanding theology.[18]

Finally, it's time to turn to actual works of theology. A good rule of thumb is to start with a work that was written for students of theology, rather than original source theology, such as Charles Caldwell Ryrie's Basic Theology. From there, Thomas Aquinas' Summa Theologica is a compelling, original source text, outlining views that are key to any Western Christian theology. Augustine of Hippo, Martin Luther and John Calvin are critical theologians in the Western Christian context. Similarly, non-holy texts that are foundational to a religion are perhaps even more important to understanding the theology of a religion, than the "holy work" itself. British Quakers have a book called Quaker Faith and Practice that is revised by the membership regularly. Catholics have the Catechisms, Jews have the Mishnah and Talmud, and Islam has the Kalam and Fiqh.

If you're interested in Islamic theology or Jewish theology, you'll need to learn how to read Arabic or Hebrew respectively. The Qur'an and the Torah lose a lot in translation, and the serious student needs to be able to read them in their original. The same applies regarding Sanskrit and Hindu texts.