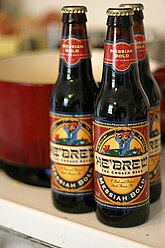 He'brew beer with pseudo-Hebrew letters: L'chaim! (!לחיים)
Hebrew, a Semitic language originally spoken in the regions now known as Israel and Jordan, serves as the primary language of the Jewish Bible. As a member of the Canaanite branch of the West Semitic languages, it is closely related to Phoenician and to Aramaic. Since it passed out of daily use by the 1st century CE, its original pronunciation is lost to the ages, but liturgical use by Judaism has led to several competing pronunciations maintained in the Jewish diaspora. Modern Israeli Hebrew-speakers regard the pronunciation of the Yemeni version as the most refined, and linguists sometimes consider it the variant closest to how the language was spoken in ancient times.

Revived as a living language in the late 19th century, Hebrew is the official language of the state of Israel, where it is the dominant spoken language (although English, Russian and Arabic are commonly used as well). Hebrew also ranks, along with Latin and Greek, as one of the traditional classical languages of Western education. Much like them, it is often considered to have magical properties by virtue of being old and associated with an ancient religious tradition. Practitioners of Kabbalah and other bullshit like to use random Hebrew words as incantations in the mistaken belief that they actually do something. An entire pseudoscience — known as gematria — devotes itself to adding up random number- and letter-combinations in the Bible and Quran and then somehow divining meaning or "proof of God's existence!!!1" from them.

Hebraists write Hebrew from right to left (like Arabic), which is good news for lefties but bad news for everyone else.

Before the Masoretes invented the modern system of vowel markings in the 7th-9th centuries CE, written Hebrew had no vowels. The reader was expected to just know the correct pronunciation of the word, given only its consonants were written. This is standard practice for Semitic languages, which tend to have relatively small vowel inventories. In modern Hebrew the letters Aleph (א) and Ayin (ע) are silent and take the sound of the vowel ascribed to them. Historically, however, they did have sounds in the Biblical era.

This, coupled with its lack of use as a living language between the 1st and 19th centuries CE, is why the original pronunciation of most Hebrew words is lost to us and must be reconstructed by the comparative method, and part of the reason why the Sacred Tetragrammaton (YHWH) is pronounced "Yahweh" (the scholarly reconstruction) by some and "Jehovah" by others (based on a flawed transliteration into Latin).

A series of vowel markings, called Niqqudim, were eventually developed in the middle ages. Niqqudim are more commonly found in prayer books and texts intended for diaspora audiences. However, they are almost never found in Israel and Torah scrolls and most other religious documents are not written with niqqudim either.

Modern Hebrew is the revived descendant of the ancient language spoken in the land of Canaan around the time the Bible was written. Hebrew is classified as a Semitic language

. Its major cousins include Arabic, Aramaic, Amharic, and Maltese. Semitic languages are also part of an even larger family, the oldest known language family, the Afro-Asiatic languages

. So it is therefore also related to languages such as Berber and Coptic. Beginning around the time of the Babylonian Exile

the related Aramaic language started to become the prominent language of the Jewish people and by the time of Jesus most people living in Judea spoke Aramaic or Greek. From that point on Hebrew then took on a status similar to that of Latin in the Roman Catholic Church; used predominantly by clergy and read in services while the average people spoke their own local languages. It wasn't until the start of the modern Zionist movement when an effort was made to revive the language. They picked it in an attempt to bridge the linguistic and ethnic divisions which had developed amongst the Jewish peoples in the time since the diaspora began.

Biblical (also known as Classical) and Modern Hebrew are about as distinct from one another as the English of William Shakespeare (Early Modern English) and today's English — more or less mutually intelligible but with significant differences. Biblical Hebrew had two verbal aspects: perfect and imperfect, as well as a present participle. By the time of the Mishnah

(approximately 200 CE) these had evolved into past, future, and present tenses under the influence of Aramaic. This form of Hebrew, used by rabbis in the Aramaic- and later Arabic-speaking world, eventually was revived in the form of Modern Hebrew. Thus its evolution, funny enough, was influenced by the evolution of a more widely-spoken Semitic language. The biggest change from the classical language to today is that Biblical Hebrew's word order was typically verb-subject-object (VSO), which is common amongst Semitic languages, while the modern language is subject-verb-object (SVO) which is more common amongst the world's languages, especially Indo-European ones but also Chinese. For example a typical Biblical Hebrew sentence might read something like "Spoke God to Moses" while today the same sentence would be rendered as "God spoke to Moses." This was a deliberate choice by the designers of Modern Hebrew because they knew it would be easier for second language learners to adapt.

Biblical Hebrew's known vocabulary may have been about 8,000 words tops, which is nowhere near enough for a modern usable language. Modern Hebrew solved that problem by adapting biblical era root words to new uses. Furthermore, Modern Hebrew had to incorporate vocabulary for things that didn't exist in the time of classical Hebrew. In some cases they are direct borrowings from English, other European languages, or even Arabic. Sometimes a word would be formed as a sort of "loan-translation" (technically called a calque) such as iton for "newspaper" which is derived from et (time) the same way Zeitung is from the German Zeit, or "tapuakh adama" (apple of the Earth) for potato, based on French pomme de terre. Of course, other languages have done similar things and given the global importance of English, English loanwords are quite common in many languages these days. Some loanwords aren't even noticed by native speakers any more — about 40% of the English lexicon is ultimately French/Latin derived, for instance, yet nobody questions the Germanic status of English.

; Hebrew speakers refer to this as smikhut (סמיכות‬ supporting or adjacency). Essentially it is when two nouns could be combined to form a third distinct noun. In Classical Hebrew this could be used to demonstrate possession much like the Genitive Case in Indo-European languages. Modern Hebrew rarely uses the Construct State in this fashion. Instead, Modern Hebrew speakers rely on the preposition shel (של) which is similar to de in Spanish. That's not to say that Construct State is totally eliminated, however. Modern Hebrew will use it but it is more typically found in things such as names or when the two combine into one (e.g. the aforementioned "tapuakh adama") or when there's some other type of qualifier. This transition, however, was actually underway in the later Classical period and shel as a preposition is in more recent parts of the Bible.

Nonetheless, the differences have led some observers to erroneously claim that the grammar arose from attempts by European diaspora communities to fit the grammar of their native languages onto Biblical Hebrew, and hence claim that Modern Hebrew is "not a true Semitic language" but rather a relexified Yiddish (a Germanic language). It's a plausible story, especially considering most of the early Jewish immigrants to Palestine were Ashkenazi Jews, but is historically inaccurate.

The phonology, however, is unquestionably based on the Ashkenazi Hebrew reading tradition, which shows obvious Yiddish influence in the emphatic consonants that either reduce to the same sound as their non-emphatic equivalents, or become more familiar Germanic sounds (sʼ > t͡s).[1] Still, some changes appear unrelated; for example, in Biblical Hebrew, the sound t changed to the th sound in thick after a vowel. In the Ashkenazi tradition this became s instead of th (e.g. "shabbos"), but in Modern Hebrew this sound change no longer occurs at all.

Language of babies and Adam and Eve[edit]

Because of its centrality to the Bible, a number of people have ascribed mystical powers to Hebrew. Various people including self-taught linguist Isaac Mozeson have claimed that all the world's languages originated from Hebrew.[2] Holy Roman Emperor Frederick II attempted to raise babies without any human contact to see if they would speak Hebrew, apparently without success. James IV of Scotland tried a similar experiment by marooning children on Inchkeith Island in the Firth of Forth; one contemporary report suggested this produced Hebrew-speaking infants, although other (probably more reliable) sources say the children died.[3][4]

Itamar Ben-Avi, born in 1882, was the first person to grow up with Modern Hebrew as his first language. This is largely due to the fact that his father, Eliezer Ben-Yehuda, who largely invented modern Hebrew, deliberately isolated him from any other languages growing up and spoke it exclusively at home.[5]