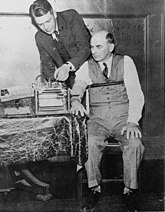 Leonarde Keeler, one of the inventors of the polygraph, testing his polygraph on a subject

A polygraph is a machine, or a test using said machine, which measures the changes in a person's body, such as pulse, breathing rate, and skin temperature. It is used as a lie detection test. It is based on the principle that when lying, one will become nervous and have an increased pulse and need for air. However, its effectiveness is very limited and the test often leads to inconclusive or incorrect results.

The polygraphy works by measuring some physiological responses to questions. The method involves establishing a "baseline" by measuring a subject's responses to certain undramatic and nonthreatening questions. Following this, the interview will take place and the measurements will be compared with this baseline. So from the method alone, it can be seen that the polygraph isn't so much a "lie detector" (as it is commonly portrayed) but just a system to measure someone's emotional state — the theory is that if someone lies, their emotional state will change. The method alone should suggest how people can produce false results or intentionally game the system in their favour. Sociopaths,[1] for example, have a nervous system that responds differently: when they lie, they remain as cool as the proverbial cucumber.[2] One in twenty-five people are sociopaths.[2] However, the ubiquity of the "lie detector" means that it has been thoroughly studied, and rarely (even when used properly by trained individuals) produces favourable results. Many pieces of research show that either a polygraph is not a valid tool for use in courts,[3] or that the validity is unmeasureable.[4]

In 2002 the American Academy of Sciences called the Polygraph "a danger to national security"[5], while John T Capiocco's Handbook of Psychophysiology states that "no spy has ever been identified as a result of a polygraph test".[6]

Ways a polygraph test can give wrong results[edit]

If the simple act of taking a polygraph test makes a subject nervous then it will be difficult for the "baseline" to be established. This makes the readings during the real section of the interview almost impossible and this leads to "inconclusive" results. Although inconclusive results should be taken as just that, inconclusive, and therefore should be ignored, they may be interpreted as a sign of guilt — on the principle that honest and innocent people shouldn't be fearful of lie detector tests. However, this is wrong; the situation of taking "lie detector" tests is harrowing for many. Indeed, an honest person who is aware of the limitations of a polygraph may be even more nervous, since they may have a strong fear of false positives, leading to a self-fulfilling prophecy.

If a particular question makes the subject nervous, even as they give the correct, or honest, response, the test will give a "false" reading. In fact, one televised use of the polygraph for demonstration purposes showed the strongest reaction to the interviewer saying "now I'm going to ask you an intimate and personal question;" although a question of that nature was never asked, the mere thought of a harassing question sent the measurements quite wild.

It is important to note that most effects that cause the polygraph to be unreliable are invariant of whether a person is innocent or guilty, lying or telling the truth, intentionally trying to produce haphazard results or not.

Ways to "cheat" on a polygraph test[edit]

There are a few ways a polygraph can be "cheated". Not all of them are intentional.

The last two are important as people can, and do, learn to do this knowing that they may be subject to a polygraph at some point. Before the actual questioning session begins, the polygraph technician leads the subject through a "pre-test" session. During this session, the technician asks the subject to answer a set of questions. The subject is asked to answer some questions truthfully, then lie when answering other questions. The technician then adjusts the polygraph to compensate for certain nervous reactions that the subject may have. Therefore intentionally cheating usually involves basically fooling around with this "pre-test" session.

To reduce the polygraph's reaction to nervousness — or lying — all the subject has to do is increase their nervousness during the truthful-answers portion of the pre-test. Among the more popular methods are:

The subject must wait until the technician asks the question before doing any of these.[8]

Use of polygraphs in a court of law[edit]

"Just when a scientific principle or discovery crosses the line between the experimental and demonstrable stages is difficult to define. Somewhere in this twilight zone the evidential force of the principle must be recognized, and while courts will go a long way in admitting expert testimony deduced from a well-recognized scientific principle or discovery, the thing from which the deduction is made must be sufficiently established to have gained general acceptance in the particular field in which it belongs." [9]

However this ruling is from 1923. In the United Kingdom and in Ontario, Canada, polygraph evidence is inadmissible in a criminal court. Polygraph tests are inadmissible in most U.S. states in criminal prosecutions; some allow their admission if both the prosecution and the defense agree to it.[10]

In the United States most private sector employees can not be forced to submit to a polygraph thanks to the Employee Polygraph Protection Act of 1988.

[11] In the private sector exceptions remain for people in security and certain pharmaceutical professions. The law does not cover government employees. Polygraphs remain in use largely in pre-screening for law enforcement and jobs in the intelligence community. Agencies can require that certain very high level security clearance applicants undergo a polygraph.[12]

In the case of US intelligence communities they have effectively acknowledged the polygraph is not a viable truth telling technique. Despite this they have chosen to continue requiring polygraphs for the simple reason that people keep revealing things during a polygraph that they otherwise wouldn't. In other words it's proven an effective psychological manipulation tool for tricking those who don't understand the limits of polygraphs into giving up secrets. One can argue that engaging in psychological manipulation of your employees before they have even started their jobs is a bit harsh, but at least the government does have a justification for using pseudoscience this one time.[citation needed]

Use of polygraphs in popular entertainment[edit]

Nada más que la verdad[13] ("Nothing But the Truth") was a Colombian TV game show series created by American TV producer Howard Schultz, owner of the ironically named production company "Lighthearted Entertainment." As of 2009, versions of this show have been produced in at least 46 countries. Currently, it is the most notorious of all "entertainments" that use polygraphs.

It should be pointed out that putting someone into a high stakes situation with family and friends watching as you're asked offensive questions that likely concern them is a recipe for a contestant to feel fear, apprehension, anger, or uncertainty rather or not you are lying, all these emotions result in the physiological symptoms the polygraph is testing for. In other words, the contestants are already primed in such a way that they are likely to give responses that look like a lie on a polygraph rather or not they are actually lying. No doubt those running the show know this and consider it a feature not a bug, after all a show is far more interesting when a contestant is called out for an embarrassing 'lie', who cares if it's really a lie or not if it makes for entertaining television right? Any resulting trouble with family and friends who believe the polygraphs accuracy and are angered by the supposed lie don't really matter as long as you get ratings.

There have been many controversies connected to this show. The original Colombian version was cancelled when a woman was asked if she had hired a hit man to kill her husband. When she answered "yes," her husband fled.

The American version, titled The Moment of Truth,[14] ran on Fox[note 5] during 2008 and 2009. While nobody admitted to anything as spectacular as a murder-for-hire plot, there were other questionable instances.