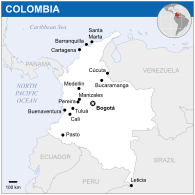 Colombia (not "Columbia") is a country in South America. Since 1948, Colombia has been the battleground of numerous domestic conflicts varying in severity and intensity, and often overlapping. It still faces an issue with left-wing guerrillas and right-wing paramilitary death squads, reminiscent of how it went down in Argentina in the 1970s and Central America in the 1980s. Much of the cocaine in the United States comes from Colombia despite the U.S. spending billions of dollars to aerially spray millions of kilograms of herbicides on Colombia's farms and forests engage in anti-coca spraying operations. Most of this cocaine is trafficked by drug cartels, which cause even more trouble for the Colombian government. The most famous of these cartels was the Medellin cartel, headed by Pablo Escobar.

Colombia is a relic of the former Gran Colombia, which also included several other modern-day Latin American nations. It was the twin failed experiment to the Federal Republic of Central America, though Gran Colombia stood a chance while FR Central America was doomed from the start.

Throughout the 20th century, Colombia was ruled primarily by two political parties: the Conservatives (center-right) and the Liberals (center-left). In the lead-up to the 1948 presidential election, the Liberal presidential candidate was assassinated, prompting a wave of riots. The Liberals decided to protest the election by not voting, resulting in the far-right Conservative Laureano Gomez Castro being elected president. Gomez sought to expand his executive power, persecuted members of the Liberal party, and basically allowed the country to devolve into civil war between Conservatives and Liberals just so he could play dictator.[1]

In 1951, Gomez suffered a heart attack and stepped down from office. Then, he tried to (unconstitutionally) return to office, which resulted in a military coup orchestrated by General Gustavo Rojas Pinilla. As military dictator, Rojas introduced television, started infrastructure projects, and granted women the right to vote.[2] Rojas was later ousted in another coup led by a military junta of five generals, who ruled the country until a public plebiscite in 1958 began a transition to semi-democratic rule. The Liberals and the Conservatives agreed to stop the civil war, which became known as La Violencia ("the Violence"), and promised to rotate the presidency between a Liberal and a Conservative every term for four terms, as well as dividing the bureaucracy evenly between Liberals and Conservatives. The country continued in this semi-democratic state until 1974, when the country transitioned back to normal elections.

Starting in the 1960s, the Colombian government faced an insurgency by left-wing guerrillas. Among the largest were the FARC, ELN, and M-19. By the 1970s, various guerrillas controlled different parts of rural Colombia. Their presence in the cities was mostly relegated to the occasional bombing or terror attack, hence why this conflict has long been considered "asymmetrical and low-intensity."

In the 1980s, cocaine trafficking cartels emerged as another key player in the Colombian conflict. The two most notorious cartels were the Medellin cartel (active 1976-1993) and the Cali cartel (active 1977-1998), based in and named after Colombia's second and third largest cities, respectively. Other cartels have since taken their place. Because the cartels and the guerrillas both had an interest in destabilizing the government, they occasionally collaborated in organizing attacks. In 1985, the M-19 guerrilla besieged the Colombian Palace of Justice (Supreme Court), killing 12 of the 25 justices along with dozens of soldiers and civilians and leading to armed combat on the streets of Downtown Bogota. The M-19 siege on the Palace of Justice was allegedly financially backed by the drug cartels.[3]

Implemented in 2000, Plan Colombia was a coordinated effort between the United States and the Colombian government to finally defeat the drug cartels and guerrillas. The United States provided military aid to the Colombian government but also to various far-right paramilitary groups. This actually made the conflict much worse, since these paramilitary groups are responsible for 80% of human rights violations in Colombia today, compared to the 12% committed by the guerrillas they were created to fight (the government is responsible for the remaining 8%).[4] Wannabe-dictator Álvaro Uribe (president of Colombia from 2002 to 2010) was a major escalator of this conflict and a close ally of George W. Bush, allowing the U.S. armed forces to test their toys in the Colombian jungle to scare Venezuelan President Hugo Chávez.

, where in order to receive prizes and promotions for supposedly killing guerrillas, sections of the Colombian military lured poor and disabled civilians with false offers of employment, where they were brutally murdered and counted as dead guerrillas, resulting in 6400 to 10000 alleged victims[5]

Since the ratification of a 2015 peace treaty with the largest guerrilla group, the FARC, the security situation in Colombia has improved somewhat, but outbreaks of violence are still an issue, especially in more rural and mountainous areas. Paramilitaries still control key mountain areas and drug trafficking routes, and while the FARC was formally reintegrated into the government as a political party, splinter FARC branches have rejected the peace treaty and continue to fight the government (and paramilitaries) in rural jungles. The increased security in the cities, however, has led to a tourism and industry boom, making Colombia one of the fastest-growing economies in South America today and an increasingly popular tourism destination for Americans and Europeans. Plan Colombia, as a result of this peace treaty, has since been renamed "Paz Colombia" (Peace Colombia).

was elected President amid claims of electoral fraud and association with drug traffickers[6], and once in power, attempted to water down the FARC peace deal while opening up the country to multinational oil corporations. Duque also endorsed Donald Trump in both of the latter's elections, and in a possible violation of US campaign laws, endorsed certain Republican candidates in Florida.[7]. Throughout his term, Duque responded harshly to two popular protests, in 2019-2020

against his handling of the economy and income inequality, introduction of austerity measures, scuttling of the Colombian peace process, as well as income inequality and human rights violations. Both protests were met with violence by Colombian police, with resulted in nearly a hundred deaths and thousands arbitrarily detained[8]. Of course, rather than take responsibility for their own incompetence, Duque's government blamed the protests on the socialist boogeyman of Venezuela.

In 2022, the former guerrilla Gustavo Petro

, who ran on a platform of continuing the Colombian peace process as well as increasing universal healthcare and social securities for the poor, was elected President, ending decades of right-wing rule.

Puerto Gaitan, Meta is the area where 25% of the nation's oil is extracted, and environmental contamination affects the local Guahibo indigenous community.[9]

An increase in social, labor, environmental, and trade union conflicts between oil companies, local communities, and industry employees in Puerto Gaitan has coincided with a phenomenon in which individuals involved in social protests have increasingly become the subjects of criminal proceedings. According to the National Seismological Network and the Colombian Geological Service, 976 earthquakes were recorded between April 2, 2013, and June 28, 2016, as opposed to 11 from 1999 to 2013. Some 81% of the personnel surveyed felt that the company where they worked did not allow free and voluntary union membership, and 79% thought they could be fired in retaliation for joining the union USO. An imbalance is also evident within the justice system in which allegations of murder and physical aggressions targeting demonstrators are met with a weak judicial response, and tend to remain in impunity, while investigations in which private companies are allegedly the victims advance with speed and agility. In addition, the direct funding by oil companies of the armed forces and the Prosecutor General’s Office calls into question the impartiality of the justice system, the military, and the police.

Although the direct causal link between the oil industry and increased seismic activity has not been established with certainty, temporal and geographical coincidence indicates a high probability that reinjection is linked to increased tremors. There is also no clear regulatory framework with regards to reinjection.[10]

To date, no executive has been held to account despite the company’s admission in 2007 that it funneled millions of dollars to Colombian paramilitaries who killed, raped, and disappeared civilians. Even after outside counsel and the U.S. Department of Justice said such payments were illegal under U.S. law, the payments continued from 1997 to 2002. While civil litigation is pending in U.S. courts against Chiquita executives, no criminal prosecution is on the horizon. Colombia has not been able to get jurisdiction over them, and there is no indication that the United States would extradite the executives.[11][12]

In 2001, four lawsuits were filed against the Coca-Cola Company by the International Labor Rights Fund on behalf of a food and beverage workers union in Colombia. According to the plaintiffs, Coca-Cola bottling plants in Colombia "contracted with or otherwise directed paramilitary security forces that utilized extreme violence and murdered, tortured, unlawfully detained, or otherwise silenced trade union leaders." Coca-Cola did not deny these accusations but merely said that these bottling plants were not directly overseen by the Coca-Cola company.[13]

Tourism in Colombia has increased since the security situation improved in the 2000s. Sex tourism has been growing especially quickly, and a major problem is sex tourism involving minors. As many as 35,000 children are working as prostitutes in Colombia.[14]

As a result of political violence and organized crime violence throughout the 20th century, Colombia has 7.7 million internally displaced persons.[15]

Traditionally a net exporter of refugees, Colombia's relative stability in recent years and neighboring Venezuela's economic collapse has led to Colombia taking in 2.5 million Venezuelan refugees since 2017 (over 1.4 million in 2019 alone).[16] This has led to some xenophobic backlash against Venezuelans, despite the fact that Venezuelans have a similar ethnic makeup to Colombians, speak the same language, and mostly follow the same religion.

When God created Colombia, He said, "Well, I'll give them mountains, all the climates, high biodiversity, shores on two oceans, many species of delicious fruits..." Then an angel told him, "Hey Lord, don't you think you're giving way too many good things?" And God said, "Just wait to see the thugs I'll give them for politicians."