Hubbard conducting a Dianetics seminar in Los Angeles in 1950.
Not to be confused with diabetics

(who are generally not cult members), or with dialectics.

Dianetics is a pseudoscientific method of psychological therapy made up by science-fiction writer L. Ron Hubbard, described in the 1950 book Dianetics: the Modern Science (sic) of Mental Health.

The basic idea behind Dianetics is that human beings have a conscious (or "active") mind and an unconscious or "reactive" mind, and that we subconsciously remember everything that occurs to us, even while asleep or unconscious, storing the memories as "engrams"[note 1] in the 'reactive mind'. These engrams can resurface when reminded of them, causing irrational emotional stress or psychosomatic illnesses.

Dianetics claims to treat these illnesses by getting the patients to re-live their engrams, allowing them to remove their traumatic associations and "refile" them in conscious memory. They have claimed that a person with no engrams remaining would be a 'Clear', and would have mental and physical abilities far beyond normal. To date, no such people have been produced; the first person who was publicly proclaimed "Clear" in August 1950 couldn't, despite her "total recall", remember what she had for breakfast, let alone remember what colour of a tie Hubbard was wearing at the moment[1] and the track record has been so far unsurpassed. The "auditing" process (essentially the Dianetic/Scientology version of Freudian analysis) is the standard method of application of Dianetic methods, and tends to involve blistering and hyper-precisely worded questioning along with observation of readings on a simple biofeedback device known as an E-Meter.[2] For those given to postmodern literary theory, deconstruction of the book shows several of Hubbard's more flamboyant character flaws, including a decided hatred of women (much of the book is devoted to analyzing cases caused by fetal engrams involving unfaithful wives and their physically abusive husbands) and a distinct lack of regard for followup research or experimental protocol.

Critics of Scientology have claimed that the Church asks its sheep followers to buy the book in large numbers so it can stay on the New York Times bestseller list.[3]

Relationship with other ideas[edit] 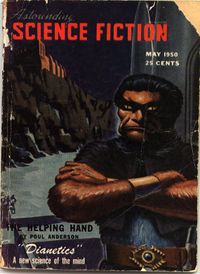 The first publication of Dianetics, in the prestigious scientific journal Astounding Science Fiction. 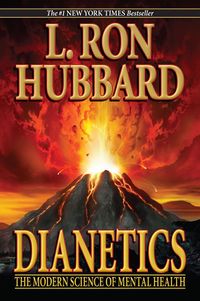 The book cover of Dianetics: The Modern Science of Mental Health, depicting an exploding volcano as a reference to Xenu

While the Church of Scientology strenuously denies any relationship with modern thinking on mental health (psychiatrists are in fact the main villains in Hubbard's extraterrestrial conspiracy theories), Dianetics seems to draw heavily from Freudian theory, with a heavy admixture of post-WWII-era computer science (including such outdated terms as "keying in", the activation of a troublesome engram, and "bank", a disparaging reference to the "reactive mind"). Dianetics was a popular subject of interest in science fiction fandom in the 1950s, with author A. E. van Vogt and pulp magazine publisher John Campbell Jr. supplying major endorsement, though fandom interest faded by the late-1950s after little came of Hubbard's work in the broader mental health field.

Dianetics later became the basis of Hubbard's cult religion, Scientology, which extends the idea of engrams into previous incarnations.

The concept of engrams is suspiciously similar to Sigmund Freud's idea of repressed memory. In fact, earlier editions of Dianetics and other pieces of Hubbard's included acknowledgements of Freud. These references were later erased and Hubbard claimed that his ideas were for real totally original. As a result, he was later met with accusations of plagiarism.[4]

"Did you ever feel like stuff, only to later feel different stuff? If so, sign here and here."

Auditing is a bogus pseudoscience, derived among other places from an incompetent misinterpretation of psychotherapy, and is found entirely within the Church of Scientology. During auditing, a subject is asked various questions and their response measured by a bullshit device known as an E-Meter. It is unsurprising that an alternative form of psychoanalysis would play a key part in a religion that has a particular hate-on for conventional mental health practices.

Auditing puts the subject, known to Scientologists as a "pre-clear", through a series of questions, known as processes. This involves the subject grasping the electrodes of the E-Meter (which, basically, uses the resistance caused by moisture in the skin to move a tiny needle just like any novelty lie detector) and the results are read, or at least interpreted, by a supposedly trained operator. It is just about possible to audit yourself if you grasp the E-Meter in a strange way and manage to look condescendingly at yourself.

The subject is placed into a light hypnotic trance during auditing. The Australian Anderson Report from 1965 concludes that the actions taken by the operator during auditing are essentially a form of "authoritative" or "command" hypnosis, making it very akin to brainwashing.[5]

Auditing ends with a big juicy wad of cash being transferred from subject to Scientology's bank account, and the operator telling the subject that they need more help. Indeed, the entire point is to repeat the auditing process as many times as needed until a subject moves from "pre-clear" (partially-brainwashed) to "clear" (more thoroughly brainwashed, and relatively free of the burden of cash).

Auditing is an excellent method of inducing false memories: the auditor "runs" an incident on the auditee until the subject no longer reacts to the material, and the subject remembers it afterward as if it had really happened. Even if he knows it's actually fictitious.[6]

The new and improved mark VIII E-meter — measures absolutely nothing to an even higher degree than previous models!

The E-Meter is a quack electronic gizmo used in $cientology. There are several versions in use, manufactured and sold by the Church of Scientology to its members, such as the Mark Super VII Quantum (which sells for $4650) and the older and cheaper Mark V which has been in use since 1962. The Church of Scientology sells them only to members who have undergone their training to be an "auditor", and has intervened to stop auctions of used E-Meters on eBay claiming sale to the public is an infringement on their intellectual property rights. Basically it is a simple ohmmeter that measures galvanic skin response (electronic resistance of the skin), somewhat similar to a polygraph; the user (the "preclear") provides one of the elements in a Wheatstone bridge

In Scientology, the E-Meter is used in "auditing" sessions which are supposed to uncover "engrams" (traumatic incidents) stored in the subconscious mind, from both the subject's current and past lives. Two metal cylinders, called "cans" (each about the size of a can of Red Bull), are wired to the meter. The subject holds one metal cylinder in each hand whilst the auditor interrogates them (often for hours on end), noting any response by the meter. It is also used as a de facto lie detector in Scientology's "security checks", during which members are asked a series of deeply personal questions regarding matters which could later be used to discredit them should they leave the "church" and become public critics of the cult.

The meter responses are not value readings per se, but examples of needle behavior (every model of e-meter ever made by the CoS has had an analog meter); for example, a "floating needle" (one which waves across the face of the meter) is considered a sign of a completed auditing session, while a "rockslam" (an abrupt sweep-bounce motion) is said to be an indicator of deceit or malice on the subject's part (and can often result in immediate remanding to an Ethics officer, or even the CoS's Rehabilitation Project Force).[7] The meter mechanism used in standard e-meter designs is undamped, allowing significant numbers of needle artifacts to give the auditor "feedback"; no e-meter designs use a digital display, save a few Free Zone designs that are intended to plug into a computer for readout and recording.

The degree of electrical contact between the subject's hands and the two metal cylinders is extremely sensitive to the amount of grip pressure the subject exerts. Even small variations in how the subject is holding them can result in a large needle movement. Thus, some of the "rockslams" are caused by the subject's hands flinching, or simply because the subject has hands that naturally tremble. It is informative to note that no E-meters are built with electrodes designed to be strapped to an area of the subject's skin that lacks muscles.

designed the original E-meter around 1950. Hubbard quickly seized upon it as a reasonably plausible tool to give Dianetic auditing the appearance of science. The original Mathison model was covered by U.S. Patent 2,684,670, and Mathison refused to surrender the patent to Hubbard; however, Hubbard ultimately one-upped Mathison by converting from a wall-current design to a rechargeable battery-driven design. The E-meter thus went from a highly recommended tool to an "obsolete" tool (after the Mathison lawsuit) to an utterly essential one as Dianetics "officially" made way for Scientology.[8]

After several incidents where the U.S. Food and Drug Administration seized E-Meters as unapproved medical devices during the 1960s, in 1971 a U.S. District Court ruled that the device has no medical value. The Church of Scientology has since labeled each E-meter with a disclaimer that it is not a medical device, and claims it is an artifact for religious use only. The current generation, known as the Mark VIII, is designed by some inspired genius to be able to plug into computers or other E-meters for external monitoring of auditing sessions.

The e-meter is useless when it comes to any of the claims made for it by Scientology, but if you absolutely must have one, you can save $4650 and build one using schematics easily found on the Internet, and (mostly[note 2]) parts from a reputable electronics-parts supplier. It is possible, with a bit of imagination, to imitate the function of an e-meter with a manual-ranging multimeter, but the e-meter uses an analog sliding range (the "tone arm") rather than discrete ranges such as on a multimeter. Besides, those multimeter probes are pointy and you'd look kind of silly anyway, so why bother?

Still, if you are really curious but don't want to get involved with the CoS, there are several e-meter "work-alikes" including the "Clarity Meter" by ClearingTech, the "Mindwalker" by Inquisitive Instruments, the "Ability Meter" by Ability Meters International, the "InnerTrac Emotional Response Indicator" by Trans4mind, and (the one that looks closest to the "real" one) the "Starlight Meter" by E-Meter-Star.

Mark I, Mark II and Mark III of the Easy-Bake Oven (Ultimate version not shown)

The current version of the E-Meter — the Mark Ultra VIII — looks suspiciously like the Easy-Bake Ultimate Oven.