From RationalWiki
Jump to navigation Jump to search
See the main article on this topic: Racialism 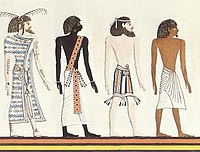 The ancient Egyptians (4) saw themselves as differing both from "Caucasians" (1, 3) and Nubians (2). This distinction, however, was based more on ethnicity or nationality than race.[1]

The modern conception of race did not exist until the 1700-1900s. What follows is a very brief history of the race concept:[2]

When Europe's intellectual center was the eastern Mediterranean ("classical" times), skin colors were apparently perceived as forming a continuum. The ancient Egyptians placed themselves between Nubians and Greeks in skin color (see image) and noted that they had features that did not appear in either. Aristotle observed that "[t]he nations inhabiting the cold places and those of Europe are full of spirit but somewhat deficient in intelligence and skill, so that they continue comparatively free, but lacking in political organization and capacity to rule their neighbors."[3] Pliny the Elder tells of an African, the boxer Nicaeus, who married a white Greek woman; their children appeared white, but darker skins appeared in the second generation.[4]

As European colonization and the slave trade began to define modern global relationships, Europeans began to rely on the idea of "biologically distinct races", primarily based on phenotype such as skull shape, hair texture and skin color.

The table below documents the progression of racialist thought, beginning in Bernier's 1684 sexual exploit logbook division of the Earth by "species" of man and ending with Coon's 1930's-1940's five-race theory. Note that the maps depicted use modern political borders; they are at best an approximation of each taxonomist's (often-poorly-defined) race system.