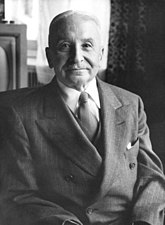 Von Mises, pictured rolling around in his money bin.

Ludwig von Mises (1881—1973) is the patron saint of the Austrian school of economics, although not the actual founder of the school (that would be Carl Menger). He is revered as one of the chief gods of libertarianism for developing the Austrian method of praxeology, which he described as a 'general theory of human action.'[1] Mises has had an immense amount of influence on libertarian thought and was greatly admired by the likes of F.A. Hayek, Milton Friedman, Ayn Rand, and Murray Rothbard.

was a real scientist and doing actually philosophically important work in developing an early definition for randomness. Obviously, they didn't get along.

Mises' greatest work is generally considered (among his followers, at least) to be the gargantuan doorstopper called Human Action, which fully codifies the method of praxeology. Unfortunately for Mises, it was pseudoscientific upon arrival in 1949 and is even more pseudoscientific in light of current knowledge.

First, Mises completely rejects reality positivism and the scientific method in the social sciences and humanities:

He then proceeds to derive his immutable "laws" of economics from a single axiom, the "action axiom." Mises doesn't formulate it as simply as his followers like Rothbard, who usually state it simply as "humans act" or "Individual humans act with a purpose"; this is the essence of the axiom. Mises, however, distinguishes what he calls "action" from instinctual behavior. Action is defined as behavior that is done with some intention in mind, i.e. a goal-oriented one. While he admits the possibility of materialistic explanations, he argues that the assumptions of dualism and free will are necessary for a "science" of human action. Of course, besides the problem of deriving an entire system of faith-based economics from a single axiom, Mises runs into the problem of making a clear-cut distinction between "action" and "instinct" that doesn't exist in psychology and the cognitive sciences (indeed, he dismisses the whole of psychology, anthropology, etc. as merely "historical" and thus unable to make any predictions). Mises also claims this tautological axiom is irrefutable, and thus a rock-solid basis for all economic theory. If you attempt to refute the claim that humans act, then you are, by definition, acting!

Another flaw in this system is that Von Mises never gave any clear definition of how new theorems are supposed to be proven by this axiom. Methods of mathematical logic that are axiom-like (like natural deduction or sequent calculus) were just being developed when he started, so it's understandable that he didn't mention them. This doesn't change the fact that in order to prove that this axiom implies any particular thing will require background knowledge, observations and other a posterori, challengeable things. So though in theory he developed his system from a single axiom, in practice he added new assumptions ad hoc and use the time honored method of Ipse Dixit to prove them.

Mises was naturally a staunch opponent of Marxism and he held that Marx believed in a fundamentally different logical structure of the mind across different classes. In Human Action, he accuses Marxism of "polylogism," i.e. that different classes use different sets of logic. Mises builds on Menger's notions of subjective value and marginal utility to define people as "economic calculators" (this largely a rehashing of the "economic calculation problem" argument Mises made in the 1920s). The knowledge of prices (which represent peoples' subjective value of goods) is distributed across all people (economic calculators) because value is subjective and thus different for each person. This economic calculation problem provides a philosophical argument against socialism; however, it doesn't make a socialist system logically impossible, e.g., it may just be highly inefficient. As (anarcho-capitalist) economist Bryan Caplan notes:

From here, Mises goes into how awesome completely laissez faire market policy is, gold buggery, and other typical Austrian hijinks. However, sane students of economics probably closed the book way back at the point when Mises declared his "theories" unfalsifiable.

Generally considered Mises' worst work outside of Austrian circles (the contemporary review in The Economist opens with the words "This is a sad little book..."[4]), The Anti-Capitalistic Mentality represents his attempt to psychoanalyze his opponents. The main thrust of the argument can be summarized in a few brief words: Capitalism is perfectly meritocratic, so if you disagree with him, you're just a free market hater who's jealous and butthurt about your station in life.