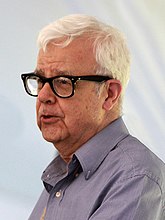 Gary Kilgore North (1942–2022) was a Christian Dominionist writer best known for killing Gore being crazier than a bag full of hammers, and for two other not-entirely-unrelated things:

He also co-wrote the book Fighting Chance (promoting a return to U.S. government-funded Duck and Cover silliness during the waning years of the Cold War), with Arthur B. Robinson, who is otherwise known for initiating the Oregon Petition.[note 1]

He was theologically a Calvinist, economically a gold bug and Austrian schooler, and did we mention one of the most prominent promoters of Y2K hysteria? Much of the writing he churned out was an attempt at fusing Rushdoony's brand of theology with Austrian theory, of which he was a very hard-line adherent. Fiat currency, the Federal Reserve, fractional-reserve banking, the name Keynes, and anything to do with the government caused him to foam at the mouth. Interestingly, unlike Rushdoony and many other Dominionists, North did not try to claim that the Constitution justifies theocracy, but argued that the adoption of the Constitution was, in fact, when things started going really downhill for America.[note 2] He advocated that the Constitution be scrapped in favor of a new, theocratic form of government.

North has also been a prominent figure within the paleolibertarian movement. Early in his career, he wrote for The Freeman and had a gig as a writer for Lew Rockwell's site. He was a research assistant for Ron Paul for a brief time in 1976.[2] This past association with Paul is probably one of the reasons that Paul's attempt at developing a homeschooling curriculum had North acting as Director of Curriculum Development,[3] a decision that reads about as "libertarian" as the naughty bits from Deuteronomy.

Furthermore, he was the author of the "Sinai Strategy"[4] a book filled with zillions of typos which explains his view of how the United States should be governed by the Ten Commandments. North, who in true hyper-Calvinist fashion ignored the New Testament

and its teachings of mercy and forgiveness as much as possible, was a big fan of bringing back capital punishment in the form of stoning (no, not that kind):

One of the conspiracy theories that North promoted is that tax-exempt organizations in the United States are promoting one world government.[6] This conspiracy theory is based on the Red Scare-era Reece Congressional Committee hearing,[6] which was largely overshadowed by the downfall of Joe McCarthy.[7]

Just as his father-in-law did, North endorsed Holocaust denial. When old issues of Reason were unearthed by journalist Mark Ames, he found that North had contributed a supportive article to an issue dedicated to denial of the Holocaust.[8]

On a good note, he once debunked the concept of "Cultural Marxism".[9]