The guillotine was the infamous height reduction device favoured by the winning side in the French Revolution. The driving force behind the invention was to produce a "humane" form of capital punishment as death was thought to be instantaneous and painless. Whether this goal was completely achieved is debatable; nevertheless it was a considerable improvement over previous methods such as beheading by sword or axe (unless the executioner was really skillful, it often required multiple strikes to sever the head, and the first strike did not always result in death) or hanging (before modern hanging, which is calculated to kill instantly by snapping the victim's neck, most hangings involved slow, agonizing death by strangulation), not to mention the more demonstrative ways of medieval torture-execution, such as breaking on the wheel.

Whether any form of capital punishment can be considered "humane" is a different debate.

The device was invented in the Middle Ages in Italy, where it was known as mannaia. It was also used in Halifax, England (the Halifax Gibbet

) and in Scotland (Scottish Maiden) where it was preferred over hanging and other more innovative means of extinguishing unwanted human life. Its use was mandated in France by Dr. Antoine Louis, secretary of the College of Surgeons and was originally named a louisette or louison in his honour. It was first used on 25 April, 1792. The name "guillotine" is taken from Joseph Ignace Guillotin, a member of the French Constituent Assembly, who recommended in a speech to that body on October 10, 1789 that a beheading device was required, as hanging was for commoners and the sword was for nobility. In addition, it was (supposedly) faster and less painful than hanging, or the sword. Because of this speech, his name became irrevocably associated with the machine. However, after his death, his children tried to have the name of the machine changed. When they failed, they changed their surname instead.

One of the great questions of the guillotine (and by extension all forms of beheading) is whether the head is still aware and conscious for any time after it is removed from the body.[1] If true, the final moment of anyone facing (away from) the blade of the guillotine would be the surreal sight of falling away from his or her own body.

In a case of good intentions gone wrong, the laws passed during the French Revolution to abolish the older methods of execution in favor of the guillotine became so entrenched that it remained the only legal method of execution in France until the death penalty was abolished there in 1981. Hamida Djandoubi was the last person to be guillotined in France, in 1977, for torturing and murdering a woman, Elizabeth Bousquet; the last public guillotining was of serial killer Eugen Weidmann in 1939.[2]

The guillotine was also used in Germany (they called it "Fallbeil", meaning "falling axe"), where it replaced beheading with sword (nobles) or with axe (commoners) in 1871, in Belgium, Italy, Sweden, and Luxembourg. When the Nazis rose to power in Germany, they extended the use of the guillotine on beheading felons, criminal convicts and dissidents. The estimates of Nazi beheadings vary from 40,000 to 60,000. The last beheading in West Germany occurred in 1949 and in East Germany in 1961, when the guillotine was replaced by having the delinquent shot.

The guillotine and the rapture[edit] 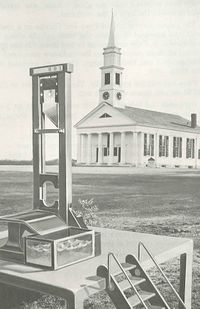 Much rapture fiction features the use of guillotines because of a reference to mass beheading in Revelation:

A large number of the more lunatic Christians believe that a vast number of guillotines are already in storage in the US, presumably in preparation for their use by the beast. Alternatively, they are to be used by the New World Order.[5]

The great Jack Chick shows his (disturbing) vision of how mobile guillotines might be used in his seminal werk The Beast.

Some crackpots are spreading that a Georgia state bill is the beginning of the guillotinapocalypse in America.[6][7] The bill is HB 1274, from the 1995-1996 session, which would have allowed the condemned prisoner to choose electrocution or guillotine, the latter should they wish to donate their organs;[8] the bill went nowhere.[9] That didn't stop them from thinking that just because the bill was proposed, and Ted Gunderson said so, that there were already guillotines stockpiled in America.

If you look deep (too deep) enough, some Christians will claim that a certain ICD code

(ICD E978 to be exact) has made Guillotines legal under er... Obamacare (what?).[10] While there is such code, and it does mention guillotines as part of a list of "All executions performed at the behest of the judiciary or ruling authority",[11] what it has to do with Obamacare is anyone's guess, and shows a lack of understanding of how ICD codes work.

In July 2014, federal judge Alex Kozinski, in a dissenting ruling on a stay of execution by lethal injection,[12] suggested bringing back the guillotine for executions,[13] since US states were having increasing problems obtaining the drugs for lethal injections:

The enterprise is flawed. Using drugs meant for individuals with medical needs to carry out executions is a misguided effort to mask the brutality of executions by making them look serene and peaceful—like something any one of us might experience in our final moments ... But executions are, in fact, nothing like that. They are brutal, savage events, and nothing the state tries to do can mask that reality. Nor should it. If we as a society want to carry out executions, we should be willing to face the fact that the state is committing a horrendous brutality on our behalf.

This has created only slight ripples[14] and the occasional Betteridge headline[15] in the conspiracy world, however.