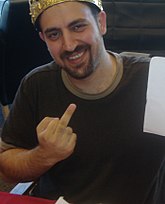 Maddox, real name George Ouzounian (March 27, 1978–), is an American writer, humorist, internet personality, and self proclaimed pirate. He created The Best Page in the Universe where he displays articles, written by himself, deriding all that he finds wrong in society while praising things that he thinks to be "kick ass." He has posted his personal opinions on his webpage since 1998[1] which could basically be considered as a precursor to a blog, however Maddox has come out in opposition to blogs.[2]

Maddox writes in a hypermasculine, edgy style which is abrasive, deliberately offensive and has sexist undertones. Despite this, Maddox tends to make good points every now and then.

In one article, he espouses the virtues of parents beating up kids, and lists over-the-top methods parents can use to beat their kids including the "Five Across the Eyes", the "Dragon Kick", and the "The One-Handed Chauffeur Reach Around" for when parents drive. On the surface level, Maddox is playing a persona not unlike Hulk Hogan or The Ultimate Warrior accusing people of being wimps for not being able to parent, but the underlying message is that in order to be a proper parent, one has to have respect from one's kids, whether that respect is fear or love. Kids need to feel terrible at the thought of disappointing their parents if they are to be obedient.[3]

In another article, he called Christopher Reeve a selfish asshole, and made a photoshop parody of Reeve getting his ass handed to him by a horse, Mortal Kombat style. Maddox then continues to point out how Christopher never set up any charities of any kind when he was an able-bodied actor living a luxurious life, until he became paralyzed from the neck down, and first then he started donating, but only to charities which would ultimately be in his self-interest.[4] Occasionally he will do deliberate logical fallacies, but for humorous purposes. "Mimes are worthless. Environmentalists are worthless. Therefore, mimes are environmentalists!" [5]

One article for example, espouses a personal political party movement risen out of dissatisfaction of both parties, and takes the most dangerous stance on abortion. Proclaiming itself the "Regressive Party", which is against abortion, but for killing babies. "That way everybody loses and I win! I'm neither pro-life, nor pro-choice, I'm pro shutting you the hell up!" In addition to declaring laws that would outlaw ska and vampires, he makes a final note of taking women's right to vote away adding "but I digress, nobody wants women to vote, except for women, and they don't count"[6]

As a result, his work, along with the works of Robert Hamburger of Real Ultimate Power, Tucker Max, and Dick Masterson are all filed under an internet born sub genre of writing called "fratire". Such aspects of fratire draw a lot of criticism, and not just from an overtly sensitive politically correct crowd. Melissa Lafsky, of the New York Times describes the sub-genre as "Misogyny for Sale".

On the positive side of the spectrum, fratire can be seen as a fantastical way to vent anger and espouse virtues of "roughing and toughing it", creating an image of what some people think they should aspire to be. On the negative end of the spectrum, the genre popularizes misogyny, which might be a factor in the creation of the manosphere in internet culture. Of course, manospherians likely wouldn't consider this to be a negative to begin with. Despite the overt sexism, Maddox is very pro-science, comes from a computer programming background, and encourages people to get into mathematics and not buy into pseudoscience (unless he agrees with it).[citation needed]