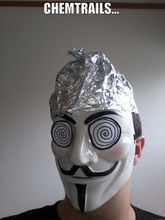 is the moniker used by a loose collective of script kiddies and ne'er-do-wells associated with the imageboard 4chan, Encyclopædia Dramatica, and various other forums since 2003. While generally anarchic, Anonymous has collaborated in several high-profile acts of digital protest and vigilantism; this came to a head in the national media during the international controversy surrounding WikiLeaks' release of US State Department secret cables, though since 2008, Anonymous had been engaged in a guerrilla campaign against organizations like the Church of Scientology.

"Anonymous" is not a defined group of people, but rather a name used by any "hacktivist" if they believe their goals align with the loosely defined interests of Anonymous.[note 1] Thus, contrary to some descriptions of it as a hive mind or a child of cyberspace, Anonymous is not much different from other examples of leaderless resistance in the past, or flash mobs in the present. What Anonymous does can vary very widely in its qualities, along with the mentalities of those who use the name.

The most common use of "hacking" by Anonymous is in fact a distributed denial of service (DDoS) attack; an attack of this nature is the real world equivalent of having a group of people loiter in front of a door preventing anyone from entering (which ironically enough they would end up doing literally in their Habbo Hotel raids).[note 2] Their other primary method of attack is to gather and distribute personal information on targets to spur mass-harassment via threatening phone calls, fake pizza deliveries, black faxes,

SWATting, etc. Such tactics give Anonymous the image of being vandals and make it really easy for the general public to dismiss what they say.

The anti-Scientology effort "Project Chanology" made Anonymous more known and led to growth and branching into political activism, perhaps most visible in the "Million Mask March

" held each year on November 5 to coincide with Guy Fawkes' Night. Their collective engagement can in practice end up seeming to be about everything and nothing, as there is no clear overarching aim. For example, the demonstration of 2013 was held in over 400 cities[2] and was heavily touted by Anonymous supporters as a global revolution and awakening. However, participants generally seemed to number in the dozens and hundreds, and it pretty much amounted to what Anonymous does online—which didn't exactly translate well into face-to-face interaction.[note 3] The prevalence of cranks, conspiracy theorists and PR coverage courtesy of such paragons of independent media like RT add further to the whole spectacle being more hot air than anything. Another "operation" by some Anonymous groups, known as the "Worldwide Wave of Action" (April 4, 2014) shaped up to be essentially more of the same but with fewer people and less media, presenting itself as a continuation of OWS with a kitchen-sink of utopianism and crankery.

In other words, their major method of operation is to do something that seems really "horrifying," but in reality is pretty much a waste of everyone's time.[note 4]

Many members of Anonymous believe conspiracy theories, like the Illuminati ones (or just enjoy trolling people with them); they like to show it to us in their videos.[note 5] By the very nature of the collective, and unlike Occupy Wall Street (OWS), it is difficult to know whether they're just trolling people, seriously condoning nonsense, or both at the same time. And regarding who the Anonymous "they" are, all you really need to do is buy a Guy Fawkes mask, and you pretty much look like an Anonymous member.

Another well-known group growing out of 4chan beginning in 2017 is QAnon, the alt-right conspirituality movement which agitated for a Trump-led revolution and "cleansing" of the "evil satanic elements" in charge of the U.S. Anonymous has denounced QAnon and Pizzagate, and accused them of being created by state-backed actors and Trump supporters with knowledge of Anonymous's workings to discredit their operations.[4]

If we wanted to assign a particular moral spectrum to the organization, it would have to be a blue and orange one. Their spawning point, and usually the place they'll spend most of their time is the /b/ (random) board on 4chan, which most people who frequent 4chan will attest actually says a lot about who you're dealing with. And yet, while they'll gleefully DDoS and hack sites and organizations just for lulz, they do sometimes take on some things most people would consider good.

Their usual methods of operation include:

Some of their more well-known activities include: