From RationalWiki
(Redirected from Magnetic monopoles)
Jump to: navigation, search

A magnetic monopole is a hypothetical elementary particle that acts as an isolated magnet, for example, a north pole without a south pole, and vice versa. This means that a monopole would have a net "magnetic charge".

Though there's no evidence of their existence, grand unified[1] and superstring theories predict them, and expect them to be rare (nucleons are expected to outnumber monopoles by at least 29 orders of magnitude),[2] which makes monopoles still consistent with physics.

While there have been no confirmed observations of magnetic monopoles, some properties of such particles can be deduced from known principles. For example, monopoles must have quantized magnetic charge, at least in a universe where electric charges exist (such as this one); likewise, electric charge must be quantized (as it is observed to be) if there exist magnetic charges.[3] Because they act as "sources"/"sinks" of the magnetic field[4] (the B-field, that is, which is sometimes referred to as magnetic flux density), magnetic monopoles would also invalidate the present form of Gauss's law for magnetism,

and require that it be modified as follows to admit magnetic charges:

The similarity to Gauss's law

(the electric one) is not coincidental.

By observing the magnetic moment of muons, a lower limit of 120 GeV can be placed on the mass of any magnetic monopoles. A substantially greater lower bound can be placed by negative experimental results if one makes certain theoretical presumptions.[5] Similarly, negative results can place limits on the flux of monopoles in our general region of space. Given that our galaxy has a background magnetic field of roughly 3×10-10 T, monopoles with a mass less than about 1011 GeV would be accelerated to very nearly the speed of light if loose out in space. Whee! Given estimates of certain cosmological parameters, a maximum can also be set on the number so accelerated in a given time, allowing a limit to be placed on our galaxy's monopole density.[5]

Physicists have been looking for these suckers since the 1930s, with only an occasional interesting (but impossible to confirm) potential detection here and there such as the so-called Valentine's Day monopole. At present, the Monopole and Exotics Detector at the Large Hadron Collider is searching for monopoles using, of all things, special plastic sheets.[6] As discussed above, the negative results of previous searches can tell us about the properties of any monopoles which might one day be found. 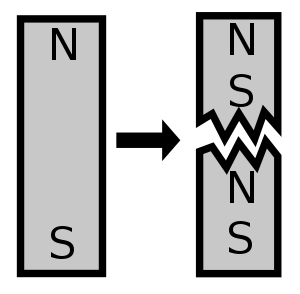 This is what actually happens when you break a bar magnet.

Of course, as with any only somewhat understood physics concept, bullshit accumulates around monopoles.

It is often believed that chopping a run-of-the-mill bar magnet in half will yield one piece with just a north magnetic pole and one piece with just a south magnetic pole. In reality, doing so yields two new magnets, each with a north pole and a south pole, as shown. This misconception likely stems from misunderstanding of the concept of ferromagnetism,

an effect which occurs because individual electrons act as small magnetic dipoles due to their spin.

of equal energy (that is, enough to occupy each orbital singly) will (likely) have the same spin, meaning that those dipoles will be aligned with each other, whereas any further electrons will necessarily have spins opposite those of the electrons they share orbitals with due to the Pauli exclusion principle,

and therefore antiparallel magnetic moments. Because of this pattern of alignment, atoms of certain materials (those with unpaired electrons, especially those with lots of them) will act as magnetic dipoles; exchange interaction

causes these atom-sized dipoles to be aligned in ferromagnetic materials, and when this alignment occurs more or less throughout the object in question, you get a good old two-poled magnet. Note that at no stage in that process was there a magnetic monopole, even though the simplistic red half/white half drawings often used to explain magnetism might seem to suggest otherwise; nonetheless, it appears that a magnetic south pole is a "proven" homeopathic remedy.[8]

where r is position relative to the guilty electron and μ0 is a constant known as the vacuum permeability.

Answers in Genesis claims that the acceptance of the Big Bang requires the existence in large numbers of magnetic monopoles.[9] This is plainly dishonest. It is true that certain grand unified theories predict that magnetic monopoles would have been produced in large quantities in the hot early universe. However, cosmic inflation, a phenomenon which also explains other notable peculiarities of the universe (flatness and the horizon problem), provides a simple answer to what happened to them, without a need to shout Goddidit as AiG would like.[10] The notion of a Big Bang can be (and originally was) derived without reliance on such GUTs, meaning that acceptance of a Big Bang model does not itself necessarily imply acceptance of even the existence of magnetic monopoles.

Naturally, anything we can't find that's been predicted is being hidden by the gummint.[11] Do You Believe That?

As with pretty much everything physics-related, enough people think of them as another reason the LHC will destroy the world that CERN has gone out of their way to explain that they really won't:[12] essentially, while there might be some hypothetical concerns with the very massive monopoles predicted by certain GUTs, such particles are far (read:far) too massive to be created in collisions of such energies as those seen at the LHC, and in regards to lighter monopoles which the LHC could conceivably synthesize, anything it can produce is already produced by everyday cosmic ray collisions, which have yet to destroy the world.[citation NOT needed]

And then there's one Miles Mathis, who attempts to explain their apparent absence by arguing for the nonexistence of not only magnetic but electric charge.[13]

Certain quasiparticles acting as sources of the H-field have been observed.[14] These should not be confused with the elementary particles discussed above, and lack the interesting theoretical ramifications thereof.