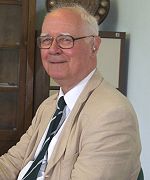 John Charlton Polkinghorne (1930–) is an English theoretical physicist and Anglican priest known for his views regarding the relationship between science and religion. He is also a writer, theologian, KBE, and a Fellow of the Royal Society. He was awarded the 2002 Templeton Prize.[2]

Polkinghorne received his Master's degree in mathematics in 1956 and his PhD in physics in 1955 from the University of Cambridge under the direction of Paul Dirac.[3][4] He taught at his alma mater where he helped develop theories about particle physics and helped discover the quark.[2] After figuring that his best scientific contributions were behind him he decided to train for a position in the other important aspect of his life, Christianity, and became an ordained deacon in 1981.[5]

On science and religion[edit]

Polkinghorne sees science and religion as two methods of viewing the same reality,[6] including the belief that the body, mind, and soul are different parts of this same reality.[7] He believes God is the reason why there is "something" rather than "nothing."[8] Three of the most important reasons he cites for why he believes "theism better makes more sense of the world, and of human experience, than...atheism"[9] are the "intelligibility" of the universe,[10] where organisms evolved to survive the everyday can understand very advanced and unrelated-to-survival topics such as relativity; moral knowledge,[11] where humans have developed strong morals; and the anthropic fine-tuning of the universe.[12]

Despite his theism, Polkinghorne believes in evolution and rejects young-Earth creationism,[13] saying that:

Polkinghorne is one of the most well-known, respected, and accomplished scientists who professes a belief in God that goes beyond basic deism — a status that elicits interesting opinions between himself and atheistic scientists. Evolutionary biologist Richard Dawkins considers him a more sophisticated and respectable theologian who understands and respects science, but still doesn't "understand what it is that is being added, either to their lives or to the storehouse of human wisdom, by bringing in this additional dimension [religion] of explanation" nor "why [he wastes his] time going into this other stuff [religion] which never has added anything to the storehouse of human wisdom, and I don't see that it ever will."[15] Polkinghorne, however, isn't quite as big on Dawkins as Dawkins is on him, saying in a CBC interview that Dawkins' "very militant form of atheism" saddens him "because it seems to me it is so polemical, it is so argumentative. Its concern is not with truth but somehow to browbeat you into unbelief. And...so Dawkins for example continually puts up straw men to demolish."[16]

Books on science and religion[edit]

Since he became a part of the Anglican clergy, Polkinghorne has been quite busy writing books on the relationship between science and religion.