Quantum entanglement or the 'quantum non-local connection' is the quantum mechanical property of a multi-object system that means that the quantum state of one of the objects cannot be described without describing the entire system as a whole. When two particles are entangled whatever change is made to one has an immediate effect on the other no matter how far apart the two particles are. It has some use in quantum computing and teleportation, although it cannot be used to violate the law that information and energy cannot exceed the speed of light. It was famously described by Albert Einstein as "spooky action at a distance". 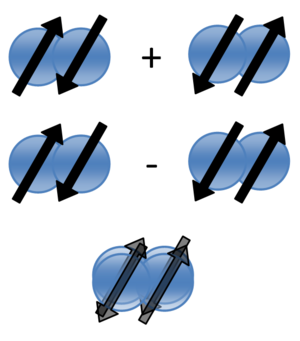 A superposition can only really be represented mathematically. If we have two states, AB and BA, and we can't tell them apart, they exist as two new superimposed states AB + BA and AB - BA.

Quantum mechanics is filled with brain-breaking facts about matter that defy common sense or any kind of sense that we're capable of thinking about. One way of thinking about entanglement is by looking at a simplified example. Consider two atoms and their property known as "spin" - this is basically whether the magnetic field of the atom points up or down in an external magnetic field (like a compass needle, but it only points north statistically). This property is interrogated at by experiments such as NMR and MRI experiments, so entanglement and superposition do have real world effects. If two atoms are coupled together in a quantum system (a fancy way of saying that they're next to each other) such as the two atoms in hydrogen gas, H2, the spins of both atoms can be entangled together in certain circumstances. If the spins point in opposite directions, up or down, it's impossible to say which is up and which is down because in H2 both atoms are identical - if we rotate H-H by 180 degrees we get H-H, which is identical. So in quantum mechanical terms they exist in a superposition of states, which is a combination of both states together (see diagram). According to interpretations of superposition, this is the case where both atoms are pointing up and down at the same time.

While the subject of superposition is interesting enough as it is, the oddest property of entanglement comes when we try to determine which atom is really pointing up or down by with an observation experiment. When we look at one of the atoms to figure out if its spin is up or down (by splitting the two atoms apart so we can distingush them), if we find that if the first one is up the other will be down - and if the first is down the other will be up. This is like performing the observation experiment on both atoms simultaneously, even if they are too far apart for information to travel between them.

This happens because the total spin is conserved; just like momentum, you can't just get extra spin from nowhere. So if you have two atoms that are up or down, they must always be up and down. If up was +1 and down was -1, the total spin is zero, and whatever happens to between those atoms, their total combined spin must remain zero. Thus, you couldn't take this hydrogen molecule and generate two "ups" (totaling +2), which you would expect to be possible if this entanglement and conservation of momentum didn't exist.

Entanglement happens instantly regardless of distance[1] - so if you took two entangled particles and separated them by millimetres, kilometres or even the size of the known universe, the communication between the two particles would still be instantaneous. Some people wonder if this means that the particles are, somehow, "still connected" and only separated in our reality. Other interpretations put entanglement down to some "hidden" variable; where states only appear entangled because of observation. Thus the final states of an entangled pair after examination were decided and coded by this variable. These hidden variable theories are mostly ruled out by theory (Bell inequalities and quantum contextuality) and experiments, leaving open only a few loopholes.

Measuring the spin will cause one of the particles to select one spin status to an observer, and the other particle - no matter how far away it is - will instantly acquire the other state, a phenomenon known as quantum collapse. This "spooky action at a distance" was something which Einstein always refused to accept.

An immediate thought is whether this "instant" quality of entanglement break the laws laid down under special relativity - namely, that nothing can break the speed of light. However, in the case of entanglement, information is not sent faster than light, and therefore doesn't break the causality of special relativity. Thus, you can't send information vast distances faster than light, no matter how much quantum woo merchants and science fiction authors may say otherwise. It is however possible to transmit a state of a quantum system by entanglement over distances (quantum teleportation). Such teleportation needs an entangled pair of qubits (quantum bits), and two classical bits. However, the teleportation is only complete when the classical information reaches the receiver, and the teleporation is only at subluminal speeds.

Entanglement is becoming a subsection of the attraction between woo and "quantum".[2][3][4] Some pseudosciences, such as remote viewing, misrepresent quantum entanglement as justifying their existence.