From RationalWiki
(Redirected from LHC)
Jump to: navigation, search

Aerial View of the CERN

The Large Hadron Collider (LHC) is a gigantic piece of scientific machinery designed to replicate conditions immediately after the Big Bang and search for new particles (predicted or not) by accelerating hadrons to relativistic speeds. It stands as a testament to the ingenuity and the continuing advancement of the technical prowess of humanity. Seriously, if you somehow get a job or internship at CERN, check it out!

There are also other smaller projects to be conducted along with the main research. The LHC is located at the European Center for Nuclear Research (CERN) facility and is contained within a 27-kilometre-long (16.7 miles) tunnel that straddles the border between France and Switzerland. The Large Hadron Collider is the most complex scientific instrument ever built and the most powerful energy particle accelerator in the world. It can accelerate particles to up to 99.9 percent the speed of light-and then some more.[1]

While highly anticipated, it has been fraught with delays and budget problems, exceeding $6 billion in construction costs. All of these have served to make it a major lightning rod for various anti-science factions. It has been attacked by everyone from the extremists, such as religious fundamentalist and Illuminati conspiracy theorists, to the mundane, with criticism of its costs, purpose, and hilarious vulnerability to birds.[2] It was turned on for the first time in September 2008, but suffered a major fault just 9 days later. It restarted again in late November 2009,[3] and has operated flawlessly ever since...with the small exception of having been brought to its knees by a rogue weasel in April of 2016.[4]

This is all very interesting, but how does it work?[edit] 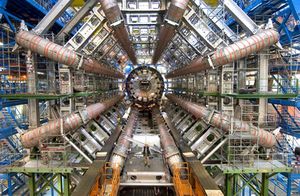 The ATLAS detector, partially built, in 2005. The eight things that look like pipes are toroidal magnets. 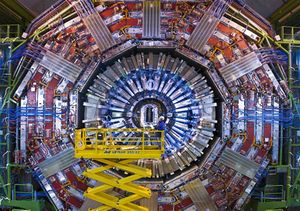 Particles, such as protons, enter the LHC through a series of small particle accelerators (in a ring shape), each one pushing them closer and closer to the speed of light until they are released into the larger LHC ring. Some of the accelerators inject particles moving clockwise, others inject counterclockwise particles. When these opposing particle streams collide, they release enormous amounts of energy. This energy is recorded by four giant detectors: ALICE (A Large Ion Collider Experiment), CMS (Compact Muon Solenoid), ATLAS (A Toroidal LHC Apparatus), and LHCb (Large Hadron Collider beauty).[5] All this data is processed using a new system of computing called "The Grid." The Grid consists of 80,000 computers in 50 countries, all designed to number-crunch the huge amounts of data the LHC is expected to produce, which amounts to 15,000 terabytes (or 15 petabytes) per annum.[6]

See the main article on this topic: Manufactroversy

The lead-up to the switch-on was a cause for concern among people who didn't know all the physics.

Some were worried that it would create a black hole and destroy the Earth. The black hole problem is theoretically real, but cosmic rays that are more energetic than those produced by CERN regularly bombard Earth without ill effect.[7] And just like all other matter, a black hole's gravitational force is proportional to its mass; black holes typically attain their immense mass from the implosions of large stars, while the microscopic black holes which could potentially be created by the LHC would not be able to consume a grain of sand, let alone the entire Earth.

Additionally, the smallest black holes, such as those the LHC would allegedly create, have absurdly small theoretical lifespans: they would shrink to nothing via emission of Hawking radiation in tiny fractions of a second, as black holes have temperature inversely proportional to their mass. Others (who'd probably been watching too much Stargate playing too much Half-Life) posited an alien invasion via an LHC-created wormhole.[8]

Another fear was that the entire Universe would undergo Total Existence Failure, although this is "infinitely" improbable.[9][10][11] and according to one Walter L. Wagner, a high school teacher from Hawaii, the LHC had a 50% chance to destroy the Earth: either it would, or it wouldn't.[12] Some believe that the LHC opened temporal rifts or wormholes between alternate universes, with people beginning to randomly slide between timelines and experience the Mandela effect when something that used to be true in their old universe isn't true anymore in this one.

A further possibility put forward[13] was that the Universe would vanish, to be replaced by something even more bizarre and inexplicable. There are some,[14] however, who think that this has already happened. The popularity of the TV series Ancient Aliens is potential evidence of this.