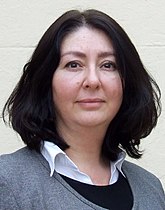 Maryam Namazie (1966–) is an Iranian-born feminist and secularist campaigner who resides in Britain. Among the groups that she has been involved with are Freethought Blogs and One Law for All. She is also a member of the Central Committee of the Worker-communist Party of Iran.

Namazie is critical of all religion, although she focuses primarily on Islam, being a former Muslim herself. Another target of her ire is the government of Israel, which she accuses of committing genocide in Gaza.[1]

Thankfully, she and Pat Condell do not get along very well.

Controversy as a university speaker[edit]

Namazie was initially refused a platform at Warwick University because her criticism of Islam was accused of being hate speech,[2][3] but this decision was ultimately overturned after a public backlash.

On 30 November 2015 she spoke at Goldsmiths University in London. Her talk was disrupted by some members of the university's Islamic Society (ISOC), which argued that Namazie was "known as a notorious islamophobe" and "the university should be a safe space for all our students",[4] but did not make a formal complaint to the Student Union. Namazie's description of the events is as follows:

After my talk began, ISOC “brothers” started coming into the room, repeatedly banging the door, falling on the floor, heckling me, playing on their phones, shouting out, and creating a climate of intimidation in order to try and prevent me from speaking. I continued speaking as loudly as I could. They repeatedly walked back and forth in front of me. In the midst of my talk, one of the ISOC Islamists switched off my PowerPoint and left. The University security had to intervene and remain in the room as I continued my talk.

Eventually the thug who had switched off my PowerPoint returned and continued his harassments. At this point, I stood my ground, screamed loudly and continued insisting that he be removed even when the security said he should stay because he was a student. When he was finally escorted out of the meeting, discussions on many issues from apostasy, the veil to Islamism and Sharia laws continued, including with some of the ISOC “sisters” who remained behind.

In the Q&A, a women’s rights campaigner who had been kidnapped by Islamists in Libya and held for three days said that the attempts at intimidation reminded her of those dreaded days. Another CEMB activist said one of the ISOC thugs disrupting the meeting threatened him by pointing a finger to his head.[5]

Apparently, Namazie's showing of a Jesus and Mo cartoon was deemed particularly objectionable.[6] Following the event, the university's Feminist and LGBTQ+ societies expressed their solidarity with the ISOC,[7][8] accusing Namazie and the Goldsmiths AHS of Islamophobia and mistreating the protesters. The incident was quickly condemned by some secular groups, who decried the feminist and LGBTQ+ societies for siding with the Islamists.[9][10][11][12][13]