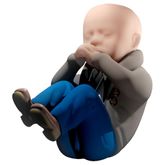 TheraminTrees is a British YouTube atheist and skeptic who publishes animated videos that debunk common religious arguments and misconceptions.

He is the brother of QualiaSoup.

He appears to have been received positively by the atheist community.[3][4][5] He's been positively reviewed by Hemant Mehta.[6] He was listed as one of Richard Dawkins' "Secular Stars".[7]

ThermainTrees argues religion and pseudoscience work in similar ways, in that both are forms of psychological manipulation that are based on faulty logic and exploit people's uncertainty in some way, such as by offering prophecies and predictions to people facing uncertain futures or by preying on those in dire sickness. He categorizes pseudoscience into two groups: