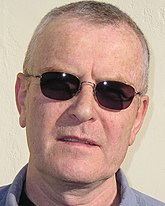 Get off my lawn, Muslims!

Pat Condell is a YouTube channel author, political commentator and atheist residing in the United Kingdom. He identifies himself as a "centrist," on the grounds that he dislikes the right (despite fawning over UKIP) and has soured towards the liberal left because of its "widespread support" for Islam.[2]

Despite their apparently numerous differences of opinion, Anders Behring Breivik described him as his "favourite comedian" in his 1500 page long manifesto.[3]

YouTube temporarily banned one of his videos – many of them criticizing Islam as totalitarian and an offence to reason – and considered suspending his account.[4]

Condell denies accusations of bigotry for his — among other things — apparently islamophobic views.

See the main article on this topic: Brexit

He is strongly opposed to the European Union, something, he said, which led him to vote for UKIP in the 2010 UK elections.

He mentioned his support for UKIP in a video encouraging viewers to vote for small parties;[10] after facing criticism he clarified that he supports UKIP because it is the only party that shares his stance on the EU, and distanced himself from its other policies.[11]

While claiming he was against the EU just because he was pro-democracy, considering those who opposed Brexit as enemies of democratic system, he was — judging by his Twitter feed — nonetheless more than delighted when he heard that a violent military coup was being attempted against Turkey's authoritarian (but nonetheless democratically elected) president Recep Tayyip Erdoğan.[12] Keep in mind, this was just 3 weeks after the Brexit referendum, during which time he made exhaustive amounts of tweets parading on about democracy and how after voting Leave, Britain has ultimately "saved" it. [13][14][15][16][17][18][19]

Because of his different opinions and opposition to Nigel Farage, Pat suddenly seems dead set on hating Bob Geldof, even when the issue has nothing to do with Brexit. [20]

Biting the hand that feeds him[edit]

Condell has also attacked certain elements of the atheist community. These include atheists who try to get nativity scenes removed from public display,[21] "politically correct" atheists who supposedly defend Islam at Christianity's expense,[22] and the Atheism+ movement, which he dismissed as "whiny selective feminism that ignores Islamic misogyny" ("I almost hope God exists so he can piss in their eye" he added).

Condell challenges portrayals of the English Defence League as a racist organization:

I went to their website and read it quite carefully, looking for racism and fascism of course, because the media keep telling me that they are far right, but, well, I’m a little puzzled because I can find is a healthy regard for human rights, democracy and the rule of law. Not a whiff of racism or fascism and not a whiff of far-right politics of any kind.[23]

His other targets include the UK-based Islamic extremist Anjem Choudary and university students who Condell feels shouldn't be entitled to free speech.

On Gab, he has repeatedly posted his opinion that Trump has won reelection by "landslide" and that China and Democrats have stolen the election.[24][25]

He believes COVID-19 was engineered and released by China, potentially to fuck with the U.S.[26][27]

He calls trans people "mentally" ill. On Gab, where he can ramble freely, he posts stuff such as "A male can no more become female than a monkey can become a pig. Allowing mentally ill males to ruin female sport is not a civil liberty."[28]

Support for the “Freedom Convoy”[edit]

Pat Condell has voiced his support for the so-called “Freedom Convoy” in Canada, saying things on Gab like “Canadian farmers break through police barricades to join the truckers blocking the border. I was fortunate enough to live in Canada when it was a free country. Thanks to these good people and many more like them, it will be again.“[29], supporting the blockade along the US/Canada border in Coutts, Alberta/Sweetgrass, Montana. The horrific consequences of this blockade have resulted in Jason Kenney caving to the “convoy”’s unreasonable demands and ending the Restrictions Exemption Program, which allowed restaurants to re-open safely.[30]