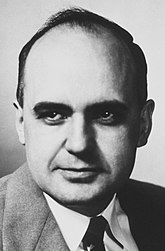 Maurice Ralph Hilleman (August 30, 1919 – April 11, 2005) was an American virologist and microbiologist credited with helping develop over 40 vaccines, many of which are still in use today. Some of the diseases for which he helped discover a vaccine included measles, mumps, hepatitis A, hepatitis B, meningitis, pneumonia, chickenpox, Haemophilus influenzae bacteria, and rubella.[1][2] Hilleman received a Ph.D. in microbiology from the University of Chicago in 1944. As a researcher at E.R. Squibb & Sons, he developed his first vaccine, which was used to protect U.S. troops in World War II from the Japanese B encephalitis virus. He was chief of respiratory diseases (1949–57) at Walter Reed Army Medical Center, Washington, D.C., where he began research on the influenza virus. In 1957 he joined what became Merck & Co., Inc. Following his retirement (1984) Hilleman was an adviser to public health organizations, notably the World Health Organization.[3][4] Taken all together, Hilleman's innovativeness is believed to have saved tens of millions of children's lives, particularly in the developing world. Unfortunately, he probably isn't as famous as he deserves to be.[5]

Vaccinated: One Man's Quest to Defeat the World's Deadliest Disease