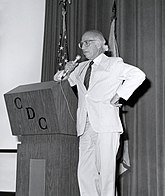 Jonas Edward Salk (1914–1995) was an American chemist and virologist who developed the world's first successful polio vaccine[note 1] which was made available in 1955. In 1952, the disease impacted almost 58,000 people in the United States alone.[1] Of the roughly 58,000 cases reported that year, 3,145 people died and 21,269 were left with mild to disabling paralysis.[2] In 1960, he founded the Salk Institute for Biological Studies. Jonas Salk went on to write a few books detailing his biophilosophy and would spend his later years studying AIDS and trying to find a cure for it. Despite not winning a Nobel Prize for his remarkable achievement, he is generally regarded as a genuine hero who positively impacted the lives of countless people.

Salk was born to Jewish parents in New York. He earned a B.S. in chemistry at the City College of New York before going on to earn a medical degree at New York University. Salk was the first member of his family to attend college. He became heavily involved in and fascinated with scientific research, preferring it to a potential career as an actual physician.[3] In 1942, Salk went to the University of Michigan where he helped develop an influenza vaccine used in WW2.[4] 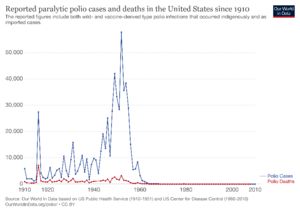 Polio, or poliomyelitis, is a disabling and life-threatening disease caused by the poliovirus. The virus spreads from person to person and can infect a person’s spinal cord, causing paralysis (inability to move parts of the body). Most who contract the disease will not exhibit signs of it, though they can still infect others. Those that do show symptoms may experience headaches, stomach pain, fever, and sore throat. Polio is spread from person to person via oral contact with fecal matter or from coughing, hence it tends to be found in places with very poor water sanitation. Additionally, the poliovirus prefers warmer climates.

Because polio can only impact humans, it can in theory be eradicated, and at present, it still only exists in 3 nations.[note 2][5] The first evidence of polio comes from mummies in ancient Egypt with deformed limbs. References towards a disease like polio appear as early as the 18th century but the disease was not named and identified until the 19th.[6] The first major epidemic in American history was in 1916, infecting about 27,000 people and killing roughly 7,000 of them.

Jonas Salk and his cure.

Clean municipal water and new vaccines had dramatically reduced the prevalence of a number of contagious diseases in the developed world. Polio was a major exception which routinely plagued urban American centers during the summer, leaving many dead or permanently disabled.[7] Starting in the 1940s, a large public campaign to find a cure was launched called the March of Dimes. Previously, during the 1930s, scientists had unsuccessfully attempted to develop a vaccine for polio.[8]

In the 1940s, Salk took up the charge and began his research which would last 7 years before culminating in a massive public health field trial. He had controversially produced a "killed virus" vaccine which other researchers doubted could work given that the only proven method of inoculation before had been to use weakened forms of viruses for other diseases. Despite the unorthodox approach, over the 1950s, polio in America was beaten and the vaccine spread around the world. Salk tested the vaccine on himself and his family before starting the 1954 nation-wide experiment which involved over one million children ages six to nine. Declared a success in 1955, the government was quick to license the vaccine and enormous amounts of serum were quickly produced.[9][10] From a peak of about 58,000 cases in 1952, the number of cases of polio in the United States dropped to less than 1,000 in 1962.

By the 1960s, the Albert Sabin oral vaccine was developed and largely replaced the Salk vaccine worldwide. Oral vaccination is still the primary method of inoculation in the Third World.[11][12] Because of potential problems with the Sabin vaccine, in 1999, a federal advisory panel recommended that the United States return to Salk’s vaccine.[13][note 3]

Jonas Salk founded the Salk Institute for Biological Studies in 1960. The institute studies a vast number of scientific topics including aging, cancer, plant biology, immunology, neuroscience, and metabolism. Salk spent the end of his life there in the 1980s and 1990s studying HIV/AIDS and working to develop a vaccine for it.[14] A number of prominent scientists worked there as well, including Francis Crick, Sydney Brenner, Terrence Sejnowski, Leo Szilard, Katherine Jones, and Renato Dulbecco.