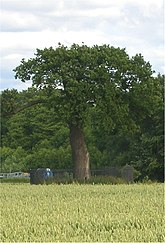 The Royal Oak of England

A tree is a large plant with a woody stem. There is no clear definition of what constitutes a tree, and they do not form a distinctive biological group or clade.[1] They are generally considered a good thing: they produce oxygen, they can combat global warming by absorbing atmospheric carbon dioxide and storing carbon, they produce lots of useful foodstuffs, they provide shelter and home to many animals and other plants, and they look nice.

It isn't clear how many trees there are on Earth, but a 2015 estimate reported in Nature was 3 trillion of the things, which is a lot more than there are people.[2]

Tree-planting is often seen as a good way of combatting global warming by absorbing large amounts of carbon.[3][4] One problem is that if, as mentioned, there are 3 trillion trees already, then making a significant difference will require planting a lot. Research led by Tom Crowther at ETH Zurich published in Science in 2019 recommended planting one trillion trees on 11% of the Earth's land to eventually absorb 200 gigatonnes of carbon from the atmosphere, around two-thirds of the total anthropogenic carbon in the atmosphere.[3]

There are also risks in that you can't just stick trees anywhere. They require water and other resources, and may have effects on local ecosystems, particularly with low-quality schemes that just plant lots of one or two types of tree rather than seeking to preserve or restore existing types of forest.[4] One traditional method of reforestation is known as "pines in lines", in which pine trees are planted in rows, but this requires expensive maintenance by foresters meaning it may be prohibitively expensive.[5] It's also important to preserve farmland for growing crops if we want to stop people dying of hunger.

A number of ambitious schemes have been announced. Ethiopia planned to plant 4 billion trees by October 2019, including 350 million on just one day, although it is unclear how many they actually planted.[6] In 2017 Pakistan completed a goal of planting 1 billion trees (despite allegations of corruption).[7] Pakistan's scheme was inspired by the International Union for Conservation of Nature's (IUCN) Bonn Challenge launched in 2011, which aimed to restore 150 million hectares of forest globally by 2020 and 350 million hectares by 2030.[8] A Turkish scheme for National Forestation Day on 11 November 2019 is alleged to have ended in failure with 90% of the 11 million trees dead within a few months.[9]

Before the UK's 2019 general election, the British Labour Party announced plans to plant 2 billion trees; this is a bit more than the recommendations of the UK government Committee on Climate Change which recommended 1.5 billion trees be planted by 2050 and appears very ambitious but not impossible.[10][11] Labour lost the election, and we'll have to wait a while to see if 1.5 billion trees are planted.

Growing trees isn't as simple as dropping a seed in the ground. Most schemes, such as those in Pakistan and Ethiopia, rely on tree nurseries to produce seedlings which must then be planted in the correct location. Growing trees require protection from grazing animals, as well as the risk of disease and insect pests, and can suffer from a lack of water and nutrients.[12] So they may require water, fertilizer, pesticide, and the infrastructure (roads/tracks, accommodation for foresters, etc) to plant and maintain them. All this adds to the costs and can provide a negative environmental impact, but it's the sort of thing farmers and foresters have been doing for millennia.

Frequently, when governments get behind the idea of tree planting on a massive scale, it winds up being tree plantations, which have a relatively relatively minor impact compared to restoring land to natural forest (3 vs. 42 gigatons of sequestered carbon).[11] Restoring natural forests is also a much more difficult task than making plantations because it usually requires specific plans tailored to each location so that that there is buy-in from the communities who will be responsible for protecting the forests.[11] There is likewise an important need to protect natural forests that are still intact because there is constant economic pressure for deforestation, and this too requires tailoring solutions to local communities.[13] Adding trees within croplands can both increase carbon sequestration and reduce pressure on deforestation with often the added benefit of increased food yield.[14]

See the main article on this topic: Trees cause pollution

This apparently goes back to a disreputable journalist named Edmund Spencer who in 1874 wrote a report about natives of Madagascar sacrificing somebody to a carnivorous tree. Untrue.[15]

These appear in Genesis 2:3. Adam and Eve ate the fruit of the tree of knowledge, and as a result were thrown out of the Garden of Eden.[16][17] There is a lot of speculation about what kind of trees they were.

Specific types of tree and their products: