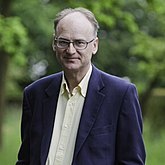 Matt Ridley, 5th Viscount Ridley, FRSL, FMedSci, DL, is a British scientist and journalist. He is a climate change denier and a member of the Global Warming Policy Foundation's Academic Advisory Council.[1] On 6th February 2013 he was elected to the unelected House of Lords.

Ridley has written several books of popular science including The Red Queen: Sex and the Evolution of Human Nature (1993), The Origins of Virtue: Human Instincts and the Evolution of Co-Operation (1996), Genome (1999), Nature via Nurture: Genes, Experience & What Makes Us Human (2003), and The Rational Optimist: How Prosperity Evolves (2003).[2] The Rational Optimist was criticised by, among others, George Monbiot for its numerous errors of science, particularly (though not exclusively) on climate change.[3] Monbiot compared Ridley's argument that state regulation was largely parasitic with the unmitigated cock-up success of Ridley's own business career.

From 2004-2007, Ridley was Chairman of Northern Rock, a British Bank, having sat on the Board since 1994. It was pure coincidence that his father sat on the same Board for 30 years and was Chairman for five.

Under Ridley's leadership, the Bank's strategy was so successful that in September 2007 it became the first British Bank to suffer a run since 1878, having applied for emergency funding from the Bank of England, and in February 2008 it was taken into public ownership, having failed to find a buyer. Ridley was heavily criticised by a House of Commons Select Committee for failing to recognise the risks inherent in the Bank's strategy.[4]

This denialism-related article is a stub.
You can help RationalWiki by expanding it.
Retrieved from "https://rationalwiki.org/w/index.php?title=Matt_Ridley&oldid=1881521"
Categories:
Hidden category: