Melatonin (N-acetyl-5-methoxytryptamine) is a hormone found in a variety of species, and in mammals it is a part of the sleep-wake cycle.

Melatonin is secreted by the pineal gland in response to darkness, and production is inhibited by light (specifically light in the blue spectrum).[1] It promotes drowsiness and decreases libido in females by inhibiting the secretion of follicle stimulating hormone (FSH) and luteinising hormone (LH). Because of its proposed ability to promote sleep it has been used in sleeping tablets. 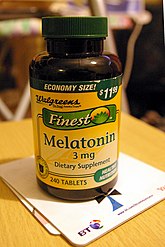 There are many melatonin supplements available sold as sleep aids, but, due to the lax regulation of supplements in general in the United States, most contain 10× or more the required dose and can actually prove to be counter-productive.[2] A summary on the meta-analyses and systematic reviews of melatonin from 2014, concludes that the many studies that purport intended effects of melatonin are poorly-designed and show modest results at best.[3] When regulated as a supplement, the melatonin bottles are wildly varied and often do not contain the correct amount of melatonin on the label,[4] surprising no one who is familiar with how supplements are regulated in the United States (they aren't regulated that well). For example, some bottles advertised to contain 1.5 mg had samples measuring at nearly 9 mg of melatonin, a difference of over 450%. These variations range from 83% below claimed to 478% above claimed. Worse, some of the products may contain serotonin, not displayed on the label, and it can lead to problems including Serotonin syndrome. Other countries such as those in Europe, however, regulates melatonin as a drug, so it may have better results.

Wonder brain chemical or not, the medical establishment has just begun its research into the effects of melatonin on the body's function, and correlative (vs. causative) links have been established with a host of modern medical problems including long term clinical depression, migraines,[5] diabetes cycles,[6] attention deficit disorder in children,[7], tinnitus,[8] weight-gain and loss, anxiety disorders, and even some cancers.[9] It's unclear if these are correlations with the associated lack of sleep common to a lack of melatonin production, or with the chemical itself but research on melatonin shows that modern interrupted sleep cycles have contributed greatly to our own medical bills.

A company in Germany has taken to milking cows in the early hours of the morning, producing milk that is purportedly 25x times higher in melatonin than regular milk.[10] The milk is then marketed as "Night Milk" or "Nocturnal Milk" as a sleep aid.

This medicine-related article is a stub.
You can help RationalWiki by expanding it.
Retrieved from "https://rationalwiki.org/w/index.php?title=Melatonin&oldid=2371629"
Categories:
Hidden categories: