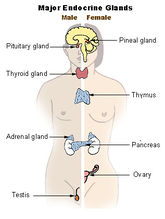 That little thing up there, that dot? That's where your soul lives.

The pineal gland is a small pine-cone-shaped chunk of tissue tucked in the middle of the brain. It is part of the endocrine system and produces melatonin, which is responsible for regulating the sleep/wake cycle and circadian rhythms of animals. Originally thought to be vestigial, the pineal gland's function was discovered in the 1950s in experimentation on cows.[1]

The pineal gland is evolutionarily homologous to the photoreceptive parietal eye,

which occurs in some reptiles, amphibians and fish,[2] and in that sense (but not the woo sense) is like a third eye.

It's also a *ahem* "well known fact" that people without pineal glands are unable to get angry.

Parietal eye in the yellow rectangle.

But what it's really known for is being the home for the ghost in the machine. René Descartes identified it as the place where the "mind" interacts with the "brain," or "the principle seat of the soul," in his treatise on dualism.[3] It may look cramped but just as an infinite number of angels can dance on the head of a pin so can many souls kick it in your pineal gland.

This brand of "Cartesian woo" has spawned various forms of pseudoscience in modern times. The third eye is a term vague enough to be shoehorned into just about any New Age claptrap. The pineal gland is a favorite of New Agers and dirty hippies. In Hinduism, it is the chakra on the forehead between the eyebrows.[4] Regular consumers of psychedelic drugs may have an obsession with the pineal gland due to their belief that it produces dimethyltryptamine (DMT), a hallucinogenic drug. This is merely a hypothesis that was proposed by Dr. Rick Strassman.[5] It has not been proved by empirical evidence, but DMT, along with the precursors for its biosynthesis, have been found in rat pineal glands.[6] In 2011, the presence of INMT, an enzyme that biosynthesizes DMT, was also confirmed in the pineal glands of primates.[7]

Discordians claim they can communicate with Eris via their pineal glands; when that doesn't work, the appendix works almost as well.[citation NOT needed]

Other forms of pineal woo include the idea that the pineal gland has become "calcified," through various nefarious agents, most notably fluoride, mercury from vaccines, even chemtrails.[8][9] While calcification of the gland can actually happen,[10] and does occur in roughly 50% of the population by age 12[11] why it happens isn't clear. It's claimed that clearing away your pineal calcification can do anything from enabling you to dream better, think more laterally, enable you to see "the truth" (read: believe in conspiracy theories), to activating psychic powers such as ESP.[12] These beliefs are the basis for the Alt-Med crowd to push supplements and "detoxing" diets that supposedly will rid your pineal gland of the calcium that accumulates there.

Some say you can "feel" your third eye if you press your finger between your eyebrows and move it around until you get a "funny" feeling. In reality, you'll just make yourself look like a jackass.

There have also been a few absolute dumbasses who have resorted to trepanation of their own foreheads to expose their "third eye" or somesuch. Do not try this at home! Or anywhere, for that matter.